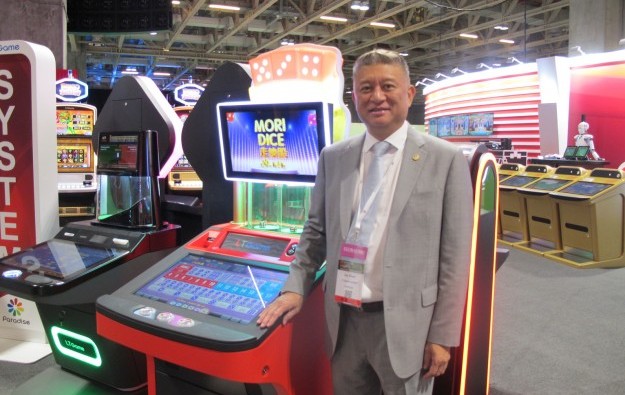 LT Game Ltd, a Macau-based provider of electronic gaming equipment and management technology for casinos, is displaying some of its newly developed sic bo products, slot titles and a brand-new “chip tracking system” at the three-day MGS Entertainment Show 2019.

“With this one [Mori Dice], you can bet on their outcome one by one. As the first dice settles and the second one is still spinning, you can continue to place bets on the game, and so forth; thereby players can hedge their bets with more betting options,” the executive told GGRAsia. Mori Dice will now go through the necessary regulatory certification, he added.

Prototypes of the Personal Dice terminal have been featured in previous editions of the trade show. The product – which is to go through further regulatory approval – is described by the firm as a “classical” sic bo game featuring a simple design, and a “user-friendly” interface, which was developed for markets in Asia.

At the trade show, LT Game also displayed what it terms a “chip tracking system”: the product features a monitoring camera installed above a gaming table and an alert system that is aimed to prevent theft of chips, or wrong dispatch of gaming chips at a table.

“If people are placing additional bets or chips in the middle of a game, which are not allowed, the [chip tracking] system will alert the dealer. This system works with regular chips but not RFID [radio frequency identification] chips,” Mr Chun explained. “I think we have an advantage with our product, also meaning in terms of cost [for operators],” he added.

The LT Game executive said the firm is “almost finished” with the development of the chip tracking system, and is in touch with Macau’s casino operators to gauge their interest in such product.

LT Game has also showcased some of its newly-developed slot titles at the MGS Entertainment Show, some of them already being sold to several venues in the United States. The slot game titles have been developed primarily by LT Game via its Macau and United States subsidiaries, as well as through its Japanese partner, LT Game Japan.

The development of slot games is a relatively new segment for LT Game. The brand is probably best known for Live Multi Game products – a category of electronic table game (ETG) product popular with Asian players, that features electronic betting and bet settlement, but with a live dealer.

Mr Chun had said previously that sales of slots products would be a focus for LT Game in 2019. Speaking at this year’s MGS Entertainment Show, the executive said such sales so far this year were “within expectation”.

“By the year-end, I think we should have sold nearly 200 slot terminals globally, and about 180 of them would have been supplied to the U.S. market,” Mr Chun said, noting that only a small number of the firm’s slot products had been leased to the hosting operators.

Mr Chun said LT Game expected to sell about “800 to 1,000” slot terminals in 2020, most of them to venues in the United States. The company also targets to develop “over 30 slot titles” every year, he added.

Commenting on the development of new products, Paradise Entertainment’s chief financial officer Leo Chan Kin Man said: “In the first half of this year, we spent HKD30 million [US$3.83 million] in research and development related to gaming products. Last year, our full-year spend on that was HKD46 million to HKD47 million.”

Mr Chan said additionally that the parent firm’s aggregate spend on research and development would likely amount to between “HKD60 million and HKD70 million” for full-year 2019.

“Ultimately we would like to expand the revenue proportion of the sales of gaming machines [for Paradise Entertainment],” Mr Chan told GGRAsia. “Now approximately 80 percent is from casino management and the remaining from gaming product sales.”

Andrew Lo Kai Bong (pictured), a senior executive at Hong Kong-listed casino investor Suncity Group Holdings Ltd, acquired controlling shares in the firm with effect from May 13, according to... END_OF_DOCUMENT_TOKEN_TO_BE_REPLACED