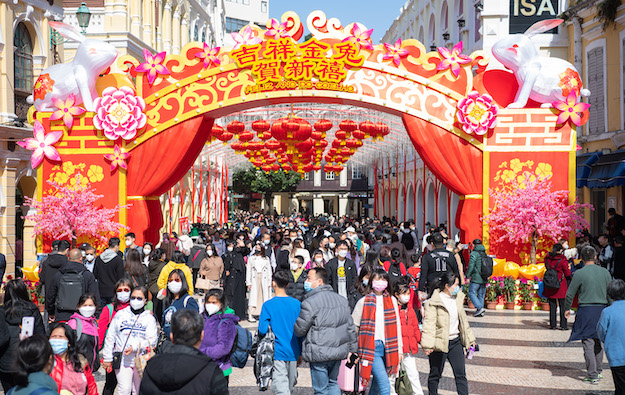 “We are past the break-even point; we are now in the positive territory,” stated Mr Goldstein, referring to the group’s performance during the week-long holiday. “We are in very positive territory and keep moving upside.”

The CEO noted that customer volume was so high during the festive period, that some patrons “cannot get a seat” at table games. Tables games “are running at 95 percent to 100 percent capacity, and it’s the same on slots and electronic table games,” he added.

“If things keep going as they are going, we will be in a very happy place in 2023, especially in the summer and the second half of the year, as normal travel patterns resume, Hong Kong gets back on speed,” stated Mr Goldstein, adding that there was also “a lot of growth potential” in mainland China.

His comments were made in a Wednesday conference call with investment analysts following the firm’s announcement of its fourth-quarter results. In Macau, the group operates via Sands China Ltd.

China’s State Council has designated the holiday period for mainland residents as January 21, a Saturday, to January 27, a Friday, inclusive. The festive break in Hong Kong is designated as running from January 23 to January 25.

Macau welcomed 244,664 visitors in the first four days of the week-long holiday, according to official data published by the Macao Government Tourism Office. That was up 330.1 percent from the comparable period a year earlier.

Mainland visitors accounted for 56.3 percent of all arrivals in the first four days of the holiday, while Hong Kong consumers represented 37.6 percent of total visitors, showed the data.

Patrick Dumont, Las Vegas Sands president and chief operating officer, said on the call that there was enough “liquidity” in the Macau market, with the city’s gaming industry likely to see a “premium-led recovery”.

“In terms of break-even, I don’t think that is really a consideration anymore, I think we are way past it,” he added.

Referring to Singapore, where the group runs the Marina Bay Sands casino resort, Mr Dumont said: “We experienced pent-up demand in Singapore and we are now at a run-rate that is really, really strong. And we are seeing that in Macau.”

Grant Chum Kwan Lock, chief operating officer of Sands China, mentioned on the call that the “quality of patronage” during the Chinese New Year period was “very high across all segments,” with revenue and gaming volumes outperforming visitor volumes.

He added: “It’s not just premium mass, it’s also base-mass and even the retail segment. So, we are seeing a very strong recovery in customer spending, and it’s extremely broad based.

Such increase in demand however has proven difficult to match in terms of supply, admitted Mr Chum.

“We are short of manpower relative to our full operating capacity, and relative to the demand that we are seeing” in the market, stated the Sands China executive.

“We are not operating one of the Sheraton towers, so we are minus 2,200 rooms from our operating capacity,” he added. The group’s newest hotel, Londoner Court, which had a “soft opening” last year, is also “not operating at full capacity,” being currently at “about two-thirds of capacity”.

Mr Chum said additionally that the company would be “progressively hiring” workers as the market recovers. “Hopefully, within the next few months we will be in a better place,” he stated, adding that the number of employees could not be directly compared to 2019, as the firm had “become more productive and efficient” during the pandemic years.

International casino operator Las Vegas Sands Corp has been ranked as the most sustainable firm in the global casino sector, according to the 2023 edition of the S&P Global Sustainability... END_OF_DOCUMENT_TOKEN_TO_BE_REPLACED