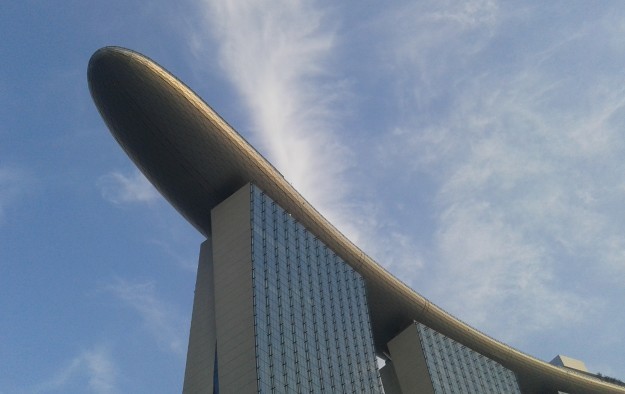 Las Vegas Sands Corp (LVS) says it would like to build a new hotel tower of approximately 1,000 rooms at its Marina Bay Sands resort (pictured) in Singapore, along with an entertainment arena. No budget was mentioned for the possible project, nor was there discussion of the number of seats the arena might have.

“They [the Singapore authorities] want an arena,” to bring a greater range of events to the local market, said the Las Vegas Sands founder.

“So we’ve designed an arena, we presented it to the government, and it looks like they will sell us the land to do it. We’ve got to pencil out the numbers, to see if the arena can pay [for itself]. But we are also looking at another 1,000 maybe 1,200 rooms in an extra room tower,” Mr Adelson said at a question and answer session during the investor conference. He added that the property currently had 2,563 room keys.

“I was there [in Singapore] two weeks ago… and the government is really anxious to get it done. So as soon as they tell us what the [land] price is, and we can pencil that out… then I think we could design and plan it before the end of this year. We’ve already got designs,” stated the Las Vegas Sands chairman.

“We retained the same architect we used to build the Marina Bay Sands,” he added.

Moshe Safdie was the architect used for the existing Marina Bays Sands site, which had its official opening in June 2010.

Mr Adelson said at the investor briefing: “To make it [the new tower] similar, we’ve got a rooftop pool, but it [the pool] won’t connect with the existing [Sands] SkyPark pool… It’ll be something new and good and beautiful.”

He added: “The variable profit from these 1,000 additional rooms… will be a big help to us.”

The Las Vegas Sands chairman had said on the group’s first quarter earnings call in April that the firm was considering selling the Singapore resort’s retail assets once a moratorium – imposed by the Singapore government on such an asset sell off – expires next year.

Singapore in 2007 issued a casino licence respectively to Genting Singapore Plc and Las Vegas Sands to operate one gaming resort each, namely Resorts World Sentosa and Marina Bay Sands. The exclusivity period for those licences expires in 2017.

Marina Bay Sands generated adjusted property earnings before interest, taxation, depreciation and amortisation (EBITDA) of US$274.9 million for the first quarter of 2016, down by 33.8 percent from the prior-year period

In Wednesday’s investor conference session, Mr Adelson mentioned the possibility of “selling maybe half – or close to half,” of his Singapore mall to other investors. “It’s a few billion dollars,” he added.

Mr Adelson suggested that this money might go toward a combination of shareholder dividends and share buy-backs.

Mr Adelson made no mention during the session – nor were any questions tabled from the audience – of the group’s legal settlement reached with Steve Jacobs, a former chief executive of the group’s Macau unit Sands China Ltd. Mr Jacobs had been suing – via courts in the United States – the group and several of its entities, alleging wrongful termination, defamation, and breach of contract.

Brokerage Sanford C. Bernstein Ltd in Hong Kong said in a note on Wednesday: “According to the Wall Street Journal, LVS agreed to pay between US$75 million and US$100 million to settle Mr Jacobs’ wrongful termination lawsuit… We view the news mildly positive to Sands China, as it eliminates uncertainty and further reputation risk associated with the lawsuit.”

Sands China is expected to seek to refresh its rights to operate casinos in Macau when its current Macau gaming sub-concession expires in 2022.

Mr Adelson stated during Wednesday’s investor conference that the Macau government had given no specific indications of what might happen regarding the possible refreshment of gaming rights for the city’s six operators. They are due to expire on various dates between 2020 and 2022. But he said “they [the Macau authorities] do acknowledge that we have done more for non-gaming in Macau than any of the other five concessionaires”.

Mr Adelson added that his new US$2.7-billion resort the Parisian, which the group hopes to open in September, and which features a half-scale replica of the Eiffel Tower, would be a “must see property” in Macau; unlike, he said, some of the recent efforts of his rivals.

The imminent return of package tours from mainland China will not only help boost Macau’s tourism businesses, but is also expected to help casinos gain more foot traffic in their mass gaming... END_OF_DOCUMENT_TOKEN_TO_BE_REPLACED