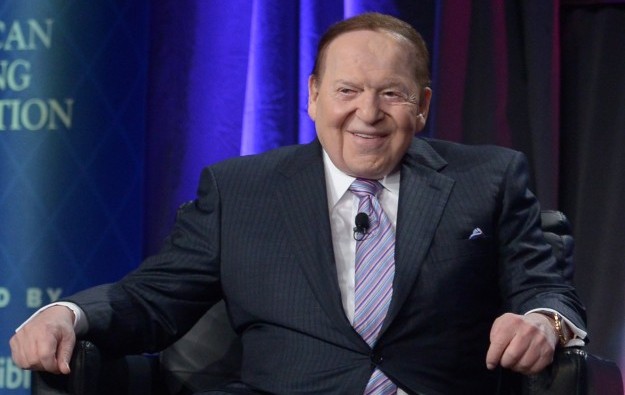 U.S.-based casino operator Las Vegas Sands Corp reported a decline of 35.4 percent in net income for the fourth quarter of 2015 to US$465.8 million. The decrease was related to softer performance in its operations in Asia, based in Macau and Singapore.

Las Vegas Sands’ net revenue for the fourth quarter of 2015 decreased 16.2 percent year-on-year to US$2.86 billion.

“Notwithstanding an operating environment that remains challenging, we delivered US$575.3 million in adjusted property EBITDA [earnings before interest, taxation, depreciation and amortisation] across our Macau property portfolio during the quarter, our strongest quarterly performance of the year,” said company chairman and chief executive Sheldon Adelson (pictured), commenting on the results, announced on Wednesday.

He added: “At Marina Bay Sands in Singapore, we continue to attract visitors from across the region to Singapore, which enabled us to generate another record mass gaming win-per-day in local currency terms. While the impact of the stronger U.S. dollar and low win percentage on rolling table games play each negatively impacted our reported financial results for the quarter, both gaming volumes and our non-gaming segments remain resilient.”

On a U.S.-generally accepted accounting principles (GAAP) basis, total net revenues for Sands China Ltd – the Macau-based subsidiary of Las Vegas Sands – decreased 21.7 percent year-on-year to US$1.66 billion in the fourth quarter of 2015.

Net income for the Macau-based casino operator decreased 29.3 percent to US$378.4 million in the fourth quarter of 2015 compared to a year earlier.

“We do see stabilisation in gaming revenue trends [in Macau],” said Mr Adelson during a conference call with investment analysts following the company results announcement.

They added: “EBITDA margin expanded to 35.1 percent (highest since 2012) principally on better business mix and continued focus on cost savings. The company delivered US$250 million cost saving in 2015 (versus goal of US$200 million).”

In its result announcement, Las Vegas Sands stated that the Parisian Macao – its fourth casino resort in Cotai and currently under construction – was scheduled to open in “late-2016”. But during the conference call, Mr Adelson said the firm was targeting a September opening, and potentially a partial opening in the summer “if the opportunity arises”.

“We are also planning to connect the Parisian Macao to Sands Cotai Central with an air-conditioned walkover bridge equipped with airport-style moving sidewalks,” he added.

Mr Adelson stated that the December opening of the 400-room St. Regis Macao hotel, at casino resort Sands Cotai Central, had a positive impact on the company’s gaming results.

“The impact on our premium mass gaming revenues in the Himalaya casino at Sands Cotai Central has been very positive. Our win per unit in Dragon’s Palace, the high limit area in Himalaya, is running at about US$16,000 since the St. Regis Macao opening, an increase of over 60 percent when compared to the two months prior to the hotel opening,” Mr Adelson said.

The St Regis Macao hotel did not add new gaming facilities to Sands Cotai Central but it has a direct entrance to Dragon’s Palace.

“We will also be expanding the retail mall in the north west corner of Sands Cotai Central and will open both the Planet J and the Monkey King theater show during the course of 2016,” Mr Adelson said. “When Planet J launches, it will be a one-of-a-kind attraction drawing families from across the region and beyond.”

Non-rolling chip drop was US$976.4 million during the quarter, a decline of 11.1 percent with a non-rolling chip win percentage of 28.5 percent, up by 1.8 percentage points. Slot handle increased 6.3 percent to US$3.32 billion for the quarter compared to the year-ago quarter.

On Wednesday, Las Vegas Sands also announced that its next recurring quarterly dividend of US$0.72 per common share would be paid on March 31 to shareholders of record on March 22. That dividend represents an increase of 10.8 percent compared to the dividend paid in the first quarter of 2015.

International casino operator Las Vegas Sands Corp has been ranked as the most sustainable firm in the global casino sector, according to the 2023 edition of the S&P Global Sustainability... END_OF_DOCUMENT_TOKEN_TO_BE_REPLACED