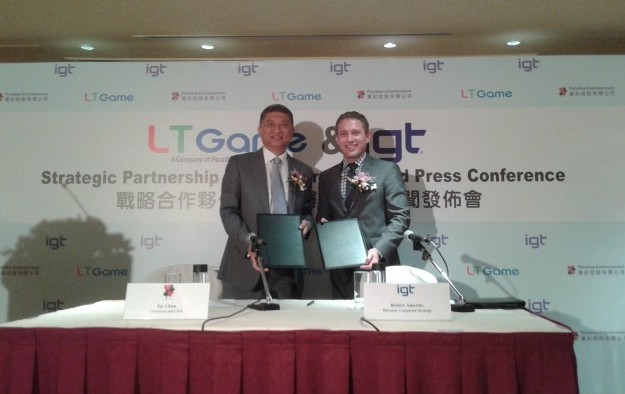 Jay Chun (pictured left), chairman of LT Game, told GGRAsia on the sidelines of the partnership signing ceremony in Hong Kong, that the initial meeting was brokered by senior executives of Las Vegas Sands during the International Casino Exhibition – known as ICE – held in London in February.

“We were introduced by very senior management of Las Vegas Sands from Las Vegas during the ICE show in London,” said Mr Chun.

Under the three-year agreement, IGT will distribute LT Game’s live and electronic table game products on an exclusive basis in the U.S. and Canada. LT Game will serve as distributor for IGT’s slot machines in Macau.

IGT is additionally granted right of first refusal for distribution of LT Game products in Europe, the Caribbean, Mexico, South America and other parts of Central America.

Mr Chun’s Live Multi-Game product – using a live dealer but electronic betting and bet settlement – is a category that has gained popularity in Macau partly because of the local government’s cap on the number of traditional live dealer tables. It is also a product area that IGT has largely left alone so far.

In North American markets table numbers are not necessarily an issue, and labour costs for trained dealers – as opposed to electronic game attendants – can actually be cheaper than in Macau.

In the U.S., the national average base pay for a traditional casino dealer is US$14,700 a year, according to the Bureau of Labor Statistics, but that figure does not include company benefits and tips.

However, the use of electronic bet settlement can push up the number of hands per hour, and the multiples bet, creating an attractive business model for casino operators, say investment analysts.

Robert Amerine (pictured right), IGT’s director, corporate strategy, had earlier told Thursday’s press conference: “Las Vegas Sands was very interested in taking the [LT Game] product to the U.S. markets. And in moving to the U.S., you’ve got a distributed market with a lot of different properties, where LT Game will benefit strategically from the infrastructure that IGT already has in place from a service and sales standpoint.”

He added: “I think Las Vegas Sands recognised there was an opportunity for us strategically in combination to work together. So they arranged some of the early meetings.”

The deal – negotiated over more than six months according to Mr Chun – could quickly, possibly by the end of this year, start to reap rewards for both partners.

“I think toward the end of the year you will see big changes,” Mr Chun told us.

It potentially opens up the North American market to LT Game – a unit of Hong Kong-listed Paradise Entertainment Ltd – via IGT’s several hundred jurisdictional licences there, he added. The firm announced in July it had been licensed to sell its products in Nevada following a successful field trial at Las Vegas Sands’ Palazzo Casino.

Robert Amerine told GGRAsia on the sidelines of Thursday’s event: “If you count the gaming licences in the tribal gaming jurisdictions, the number of [IGT sales] licences is probably in the couple of hundred range.”

He added: “How quickly LT Game could benefit from the IGT licensing would depend very heavily on the specific jurisdictions. Some jurisdictions follow GLI [Gaming Laboratories International] standards for example. So to the extent that you go through the product regulatory process to ultimately approve within GLI [standards] that may open up some jurisdictions immediately.”

Asked if there were any plans for IGT to take any equity stake in LT Game, Mr Amerine told us: “At this point we’re focused on making the commercial relationship work, so there is no minority investment. It’s not something we’ve contemplated at this point, so we’re going to stay focused on making this strategic alliance work.”

Asked whether the deal had to be approved by lottery company GTech SpA – which in mid-July said it was acquiring IGT in a US$6.4 billion leveraged deal – Mr Amerine told us: “We’ve been working in consultation with GTech to make sure they’re fully up to speed with it and fully supportive. GTech is very excited about this relationship going forward.”

Commenting on LT Game working as IGT’s sales agent in Macau, Mr Amerine indicated that there could also be collaboration on game content in the slot segment, as well as improved relationships at government level.

He said: “We feel with a local partner the ability to have better access [in Macau]; [to have local] market research and the local relationships that go along with regulatory approvals, that [the partnership] will help us navigate [deals] faster and in higher quantities.”

Mr Chun told GGRAsia that because IGT’s partnership with LT Game in Macau was focused on slot product and not electronic table game product, it would not be affected by ongoing litigation over patent rights in the Macau market between LT Game and SHFL entertainment Inc.

Macau mass-market casino gross gaming revenue (GGR) for the recent Chinese New Year (CNY) holidays could have recovered to at least 60 percent of that for the 2019 break, when the festivities were in... END_OF_DOCUMENT_TOKEN_TO_BE_REPLACED