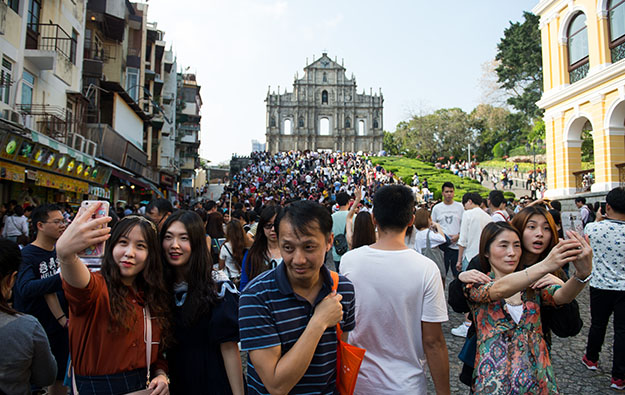 Macau is on average the fourth most expensive among the nine Asia-Pacific cities most popular with Chinese tourists, says a new research report from brokerage Sanford C. Bernstein and Co LLC, citing data from Budgetyourtrip.com and Sanford Bernstein analysis.

The top-nine destinations, ranked by daily price of trip measured in U.S. dollars – and excluding costs of casino gambling in those cities where it is available – were, in descending order of cost: Hong Kong; Tokyo; Singapore; Macau; Sydney; Seoul; Bangkok; Kuala Lumpur; and Manila. Of those places, only three – Hong Kong, Tokyo and Bangkok – do not have licensed casino resorts. In Kuala Lumpur’s case, the country’s only casino resort, Resorts World Genting, promoted by Genting Malaysia Bhd, is 34 kilometres (21 miles) from the city centre.

In Macau the average daily price of trip – excluding spending on gaming and retailing, and travel costs – was circa US$110, compared to circa US$140 in Hong Kong, about US$110 in Singapore, circa US$100 in Seoul, and about US$30 in Manila.

“Considering lower transportation costs (due to proximity) and shorter average stay per trip, for a Chinese tourist, average cost per trip to Macau is at the lower range among its peers,” stated the report.

Visitors from mainland China made up 67.3 percent of the total of tourists to Macau in the first eight months of 2017, or nearly 14.37 million arrivals, an increase of 5.9 percent year-on-year, according to official data. Mainland China is also the main source of gamblers for Macau’s casino industry.

Sanford Bernstein’s analysts said – by way of explaining why in recent times the growth in the number of overnight visitors to Macau had outpaced growth in same-day tourists: “The portion of Guangdong visitors has been decreasing over the past few years and had dropped to 43 percent of total Chinese visitation in the last 12 months.” That was a reference to the populous and prosperous Chinese province next door to Macau.

Citing data from Macau’s Statistics and Census Service and Sanford Bernstein analysis, the brokerage added: “Visitation from Guangdong has been growing relatively slowly at under 2 percent from 2011 to 2016 in compound annual growth rate (versus 7.5 percent for non-Guangdong [other Chinese] provinces).”

The report added that expansion in Macau’s hotel room inventory would be a “critical driver” of growth in visitor numbers.

The firm said the estimate was based on the assumption that average length of stay in Macau remained at an average 1.4 nights, with an average 1.7 overnight guests per room – the same as in 2016. The forecast anticipated however an “improving [hotel] occupancy rate” over the next four years.

Sanford Bernstein additionally noted it expected mass-market gambling to account for 60 percent of casino gross gaming revenue (GGR) by the end of the decade.

“We estimate Macau GGR to have a compound annual growth rate of over 8 percent between 2016 and 2020 (5 percent in VIP and 11 percent in mass),” wrote the analysts.

Only two of Macau’s 18 satellite casinos – the Rio Casino and the President Casino – have closed amid changes to the city’s regulatory system for such properties, and against... END_OF_DOCUMENT_TOKEN_TO_BE_REPLACED