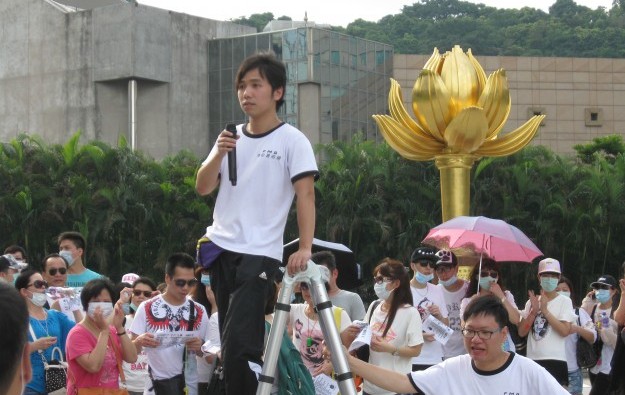 The labour activist group Forefront of the Macao Gaming says the government has to be more efficient in enforcing the smoking ban on casino mass floors in the city. The association is also calling for the whole of gaming venues – including VIP rooms – to be smoke free.

Since October 6, smoking on casino main floors is only allowed in enclosed airport-style smoking rooms that do not contain any gaming tables or slot machines. VIP gambling areas – usually physically separate from the main floor – are exempted from the ban.

Members of the Forefront of the Macao Gaming met with officials of Macau’s Health Bureau on Wednesday. The labour group has organised several protests by casino employees this year, demanding pay rises and improvements in working conditions and staff promotion policies.

Ieong Man Teng (pictured centre in a file photo), president of the association, said it wants the government to enforce strictly the anti-smoking law and ensure that gaming operators are prosecuted if they breach the law.

Mr Ieong, quoted by local media, said there is confusion about the areas where smoking is allowed and that some casino operators are taking advantage of what the association describes as loopholes in the new rules, in order to set up more smoking areas.

Different legal views on the interpretation of the set of smoking rules have put the Macau government and Melco Crown Entertainment Ltd at odds. The case might end up in court, Lei Chin Ion, head of the city’s Health Bureau, admitted last week. Melco Crown has denied any wrongdoing.

Melco Crown executives confirmed on a conference call last week that the firm has converted most of its premium mass areas to VIP in the second half of October. Management said they have seen some negative impact on gambling activity because of the smoking ban.

On Wednesday, Mr Ieong said the labour group also wants the smoking ban to be enforced in VIP rooms.

“Ever since the smoking ban has been applied to the mass gaming floors, the effect on gaming revenue has been minimal. We want the VIP rooms to implement the ban as soon as possible,” Mr Ieong said, according to English language newspaper Macao Post Daily.

A number of investment analysts have said mass table games revenue in Macau fell 8 percent year-on-year in October. Several linked the fall in mass revenue to some casino operators moving premium mass players into VIP areas to allow them to continue to smoke.

Market wide, Macau experienced a 23.2 percent year-on-year drop in total gross gaming revenue for October – the steepest decline since 2005, when the regulator the Gaming Inspection and Coordination Bureau began collecting market data in its current form.