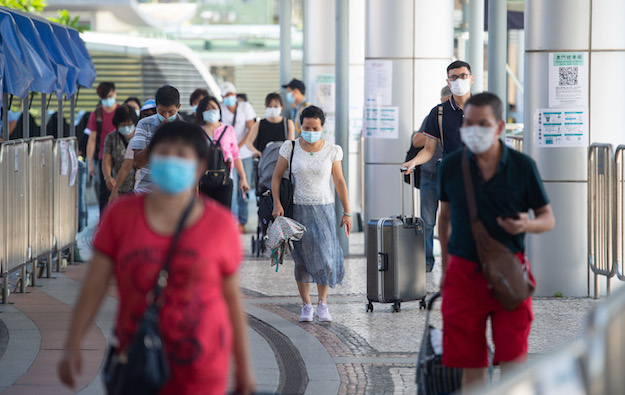 Since early December, there has been a steady rise in the number of mainland China places where departing travellers are covered by Macau’s quarantine-on-arrival requirement, due to Covid-19 infections being reported in the places.

The latest additions to the list include: Jinghong city in Xishuangbanna Dai Autonomous Prefecture and Chenggong District in Kunming city, Yunnan province; Shaanxi province’s Yan’an city and Xianyang city; Jishan county and Xinjiang county in Yuncheng city of Shanxi province; and some places in Guizhou province. That is according to notices issued by Macau’s Health Bureau, published respectively between December 24 and December 28.

Since early December, travellers from places in several mainland China provinces and cities have come under Macau’s quarantine-on-arrival rule. Those places are within respectively, the provinces of Yunnan, Guangxi, Shaanxi in the northwest, and Shanxi in the north, Henan, Guangdong, Heilongjiang, Zhejiang, Jiangsu, Guizhou and Anhui. Beijing city, Tianjin city, and the Inner Mongolia Autonomous Region, are also covered by the rule.

Currently, mainland China remains the only place to have a largely quarantine-free travel arrangement with Macau.

Since mid December, mainland China has recorded a number of Omicron-variant cases of Covid-19: all classified as ‘imported’. Such infections have been documented in Tianjin city, and Guangdong province’s Guangzhou city and Shenzhen city, according to several media reports.

Macau received a daily average of 24,374 tourist arrivals from December 17 to December 23 inclusive. On December 24, the daily tally was 40,284, according to the latest available data released by Macao Government Tourism Office.

There is no public holiday in mainland China in the month of December. The imminent holiday for mainland Chinese citizens falls on the three-day break for calendar New Year, and runs from January 1 to January 3, 2022. After that, comes the lunar-based Chinese New Year holiday break running from January 31 to February 6, according to the stipulation of the country’s State Council.

Most of Macau’s casino operators are likely to generate positive free cash flow in the first quarter, given the robust recovery level of mass-market gross gaming revenue (GGR) in January, relative... END_OF_DOCUMENT_TOKEN_TO_BE_REPLACED