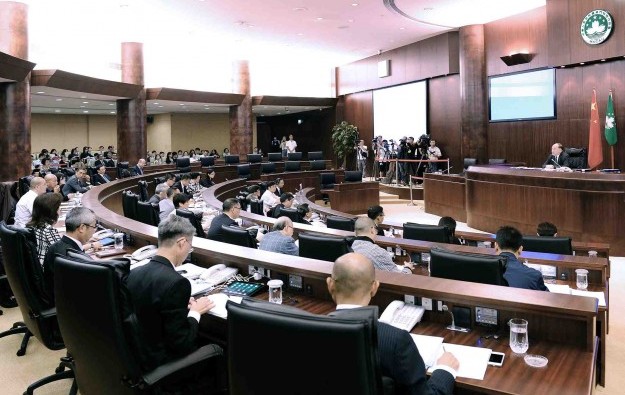 Macau’s Secretary for Social Affairs and Culture, Alexis Tam Chon Weng, on Tuesday appeared to rule out the possibility of keeping smoking lounges on Macau casino mass-market floors. He said government policy is to introduce a complete smoking ban for the local gaming industry.

Last week several investment analysts, citing conversations with management at local operator SJM Holdings Ltd, suggested the government might still be open to the possibility of retaining such lounges.

According to rule changes enacted in October last year, smoking on casino main floors in Macau is currently only allowed in enclosed smoking lounges that do not contain any gaming tables or slot machines. But puffing a cigarette while gambling is at present still allowed in VIP rooms. The government plans to close all those loopholes.

Mr Tam suggested that the smoking ban is not directly correlated to the slump in gaming revenue, saying that VIP revenue fell the most in the first quarter despite gamblers being allowed to smoke within VIP rooms.

“If the new rules are implemented with no smoking lounges allowed inside the casinos, the [mass] players may need to walk all the way out of the property physically to smoke. This decrease in time spent at the table is likely to impact the gaming revenue,” Mr Fong and Ms Wong stated in a note on Wednesday.

“On the VIP side, we believe that this rule may prompt the junkets taking players overseas where there is a more accommodative operating environment,” they added.

During the session several Macau legislators expressed concern over the potential economic impact of a full smoking ban in the city’s casinos. Direct taxes from gaming brought in 83.4 percent of the government’s total revenue in the first four months of this year, according to government data.

Indirectly elected legislator and businessman Chan Chak Mo said a full smoking ban might lead to a “sharper drop in gaming revenue” and lead some gamblers to “refrain” from coming to Macau. That “could have a great impact on Macau’s economy”, he added.

Investment analysts have suggested VIP revenue could be especially affected by a ban on tableside smoking.

Several legislators asked the government to consider alternatives short of an absolute smoking ban in casino premises. Others said the government should strengthen supervision to make sure the current partial ban is enforced.

The city’s casino GGR fell year-on-year for the 11th month in succession in April, according to official data. Macau’s Secretary for Economy and Finance Lionel Leong Vai Tac said earlier this month he couldn’t predict when there might be a rebound in the city’s casino GGR.

The Macau government “stands firm” on its intention to implement a full smoking ban in gaming venues, Mr Tam said on Tuesday.

“We will revise the [tobacco control] law,” Mr Tam said in the meeting with legislators, adding that the review is now in its final stage. It would include provisions to increase the tax rate on retail sales of tobacco and the fines for violators of the rules on public smoking.

The amended bill “should be ready within the first half of this year,” the secretary said. The bill will then be sent to the Legislative Assembly, but it is not likely to be approved in the current legislative year, which ends on August 15.

Mr Tam cited a government commissioned survey on the tobacco prevention and control system, showing that 85 percent of the surveyed tourists agreed with a full smoking ban. According to the survey, only 10 percent of the tourists said they would not consider returning to Macau if a full smoking ban is implemented in the city’s casinos, said the official. The number of people surveyed was not reported.

The new bill will also regulate the use of electronic cigarettes, government officials said on Tuesday.

“Reopening” of China relative to its current “Covid-zero” policy could start “in spring 2023” based on “three signposts” that could emerge after the 20th National Congress of the... END_OF_DOCUMENT_TOKEN_TO_BE_REPLACED