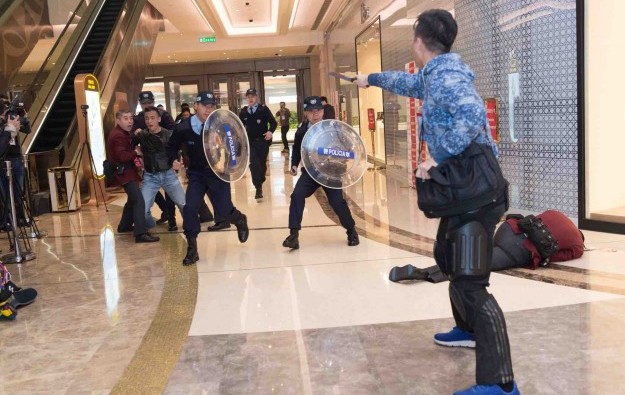 Emergency and other Macau government workers joined a simulation drill overnight on Monday at the Galaxy Macau casino resort operated by Galaxy Entertainment Group Ltd. The government said the drill (pictured) had been designed to test the ability of public-sector departments and the local casino industry to coordinate and handle a response to major incidents. It added it was satisfied with the outcome.

Nine government departments participated in the drill, including the Unitary Police Service, the Judiciary Police, the Public Security Police Force and the Gaming Inspection and Coordination Bureau, Macau’s gaming regulator which is also known by the acronym DICJ.

The Unitary Police Service and the gaming bureau described the simulation exercise as a success in separate press releases on Tuesday.

The police press release confirmed that the two-hour-long exercise, code-named “Wolf Hunting”, took place at Galaxy Macau. The property is across the road from the main Macau barracks of the Chinese military, the People’s Liberation Army.

The exercise simulated an armed robbery in a public area, with four ‘criminals’ attacking a ‘passer-by’ before escaped into a crowded hotel lobby. Scenes of multiple injuries, a bomb threat, people being held hostage and standoffs between the police and the ‘criminals’ were involved, said the Unitary Police Service release.

During the simulation exercise, the gaming bureau also tested the “Major Incidents Emergency Communication Mechanism”, which was established last year following the deadly attack on June 2 at the Resorts World Manila casino complex in the Philippine capital.

The gaming regulator said in its Tuesday press release that the test achieved the expected results.

Macau’s Secretary for Security, Wong Sio Chak, had noted to local media in November that the government planned in the first half of 2018 to launch a “large-scale, joint contingency drill” involving local casinos and their surroundings.

The Monday drill came only days after the theft of casino chips with a face value of nearly HKD47.9 million (US$6.1 million) from the Wynn Macau casino property on the city’s peninsula operated by Wynn Macau Ltd.

Casino operator Melco Resorts and Entertainment Ltd announced on Thursday that it would launch at the end of June a new, themed zone for “family-friendly” entertainment at its majority-owned... END_OF_DOCUMENT_TOKEN_TO_BE_REPLACED