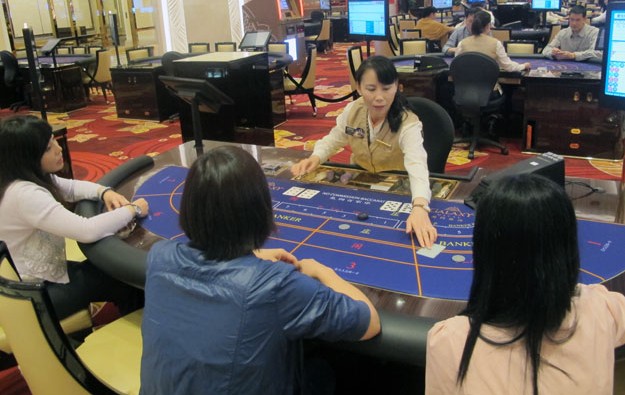 Galaxy Entertainment Group Ltd experienced a 30 basis points fall in its share of Macau VIP gaming chip roll in May, said a note on Wednesday from Daiwa Securities Group Inc.

Investors are currently looking for any sign that a longstanding market dynamic – namely that fresh supply of casino facilities in Macau creates fresh gambling demand – still holds true. The current context is the May 27 opening of Galaxy Entertainment’s Galaxy Macau Phase 2 and Broadway at Galaxy Macau.

“Of the five days these properties were operational in May, we did not see a substantial shift in market share,” said Daiwa’s Hong Kong-based gaming analysts Jamie Soo and Adrian Chan.

But they added that Galaxy Entertainment’s share of mass-market gross gaming revenue (GGR) for May rose 20 basis points. The institution also noted that according to its local sources Broadway’s non-gaming offerings – including an open-air street of local speciality restaurants and food stalls – have been drawing “robust foot traffic”.

“We expect Galaxy Macau Phase 2 and Broadway Macau to continue to be the centre of attention this month, as June’s full-month numbers for these two properties will be a better test of the ‘build-it-and-they-will-come’ mantra,” they wrote.

Union Gaming Research LLC said in a Wednesday note that Macau hold rates for VIP gambling during May were “a little above normal”.

Hold rates for casino games can have an impact on GGR market share. The latter measurement – while not factoring cost of sales – is a popular yardstick for measuring the performance of individual operators in the Macau market.

GGRAsia reported on Monday – quoting industry figures – that Galaxy Entertainment’s share of GGR slipped 1.6 percentage points month-on-month to 18.5 percent in May, putting it in third place among the six local operators.

“The biggest event in May was the opening of Galaxy Macau Phase 2 and Broadway; however, given the late month (May 27) opening, there was insufficient time for these new additions to have a material impact,” wrote Union Gaming’s U.S.-based analysts Christopher Jones and John DeCree and Macau-based Grant Govertsen.

They added that if the Macau market’s recent average daily revenue of HKD652 million (US$84.1 million) continues, then June revenue could be HKD19.6 billion – a 26 percent year-on-year decline, but still a more than 10 percentage point improvement on the “current trajectory”.

Macau GGR fell 37.1 percent in May according to official data released on Monday. Daiwa said in its note it expected Macau’s June GGR to decline by 30 percent year-on-year.

Cameron McKnight and Tiffany Lee of Wells Fargo Securities LLC said in their Wednesday note that all Macau operators had seen their mass revenues drop for the fourth month in a row during May.

“Junket volume growth continued to decelerate for the 13th straight month, and slot revenues remain weak (down 13 percent year-on-year), suggesting the downtick in revenues is broad-based,” they added.

The analysts also noted that “based on current trends”, June gaming revenue was likely to contract by 30 percent plus. “Given this weakness, we see downside risk to our second quarter 2015 estimates,” the Wells Fargo team stated.

Casino equipment supplier Sega Sammy Creation Inc said in a Friday release it was debuting its Genesis Crest 43J cabinet in Asia. The product will be available at an in-person trade show, G2E Asia:... END_OF_DOCUMENT_TOKEN_TO_BE_REPLACED