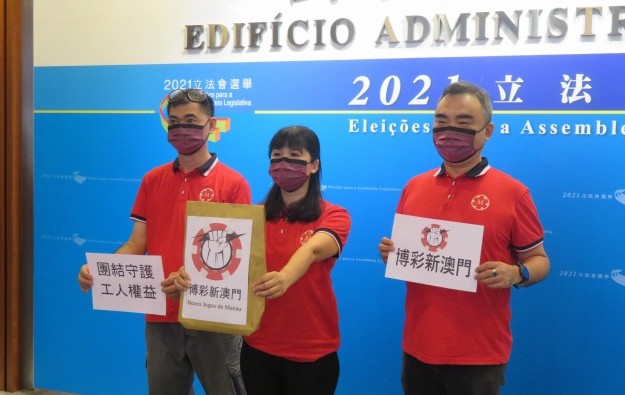 Election day will be Sunday, September 12, according to the city’s Electoral Affairs Commission. Typically, a candidate topping a ticket has the best chance of winning a seat, if the ticket can itself garner a sufficient portion of the votes available. She stood unsuccessfully in the 2017 election.

Ms Chao, known to the public for heading the New Macau Gaming Staff Rights Association, submitted on Monday to the Electoral Affairs Commission the candidate list for her ticket, and its electoral platform. Eight candidates – including her – will run on a ticket to “advocate casino workers’ rights and benefits”, she remarked to local media at the time her group handed over its list to the authorities.

“We hope that we could win at least one [directly-elected] seat in the assembly,” said Ms Chao.

She expected “fierce” competition in this year’s election, where a total of 19 tickets are due to stand.

The term of the next Legislative Assembly will run from 2021 to 2025. The body will have 14 directly-elected legislators, 12 legislators elected from five constituencies representing various economic and social sectors, and seven government-appointed ones.

“The gaming concessions are expiring [in 2022] and this situation coincides with the Covid-19 pandemic. So our worry is that… the demand for casino staff will dwindle… and [that] when the gaming concessions’ rights are refreshed, the casino firms will seek to cut the number of staff,” said Ms Chao.

Ms Chao told local media that her election ticket would stand on a platform of: defending local workers’ employment prospects; advocating better benefits for casino shift workers; and pushing for a trade union law in the city. The platform is similar to what a ticket with her as a candidate offered at the 2017 election.

In 2017, the ticket involving Ms Chao gained 3,126 votes, representing only 1.8 percent of the total votes cast for that year’s direct election. Her group subsequently failed to gain a directly-elected seat in the Legislative Assembly, as at that time it required at least 8,348 votes to win one.

Ms Chao has been prominent in recent years in lobbying the city’s government on labour disputes occurring between casino employees and the city’s casino operators.

Macau does not have a trade union law to permit collective bargaining by labour groups on behalf of workers, but lobbying of the government by Ms Chao’s group and others, has often proven effective in the past in influencing casino-operator labour practices.