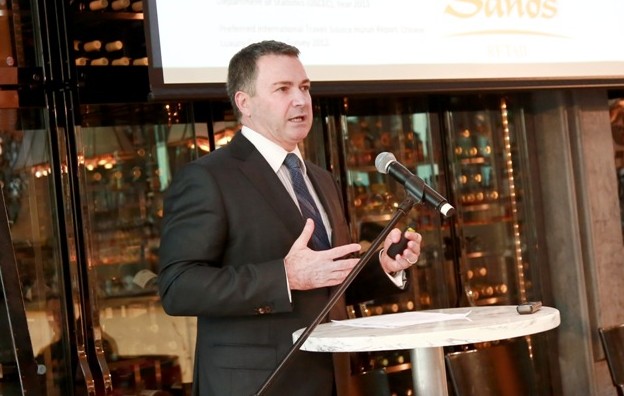 The slowdown in casino revenue in Macau is “generally” not hurting mall operations at Sands China Ltd’s properties, says a top executive.

“We are still going up,” said David Sylvester (pictured), senior vice-president of retail for Las Vegas Sands Corp, the parent of Sands China. “We are still getting the customers here,” he told GGRAsia.

The Macau market as a whole has seen year-on-year declines in gross gaming revenue since June, mostly triggered by drops in VIP revenue and, more recently, also in the mass market. The October decline of 23 percent was the biggest year-on-year monthly drop since the Macau government started to issue gaming revenue data in its current form in 2005.

“Sales of certain elements of retail like some of the watches are a bit softer,” Mr Sylvester acknowledged. “But the mainstream, the fashion, is still seeing good growth.”

Sands China is the gaming operator in Macau getting the most revenue out of non-gaming elements. A strong performance in all non-gaming areas helped the firm to prevent a year-on-year drop in net revenue during the three months ended September 30. Mall operations were the biggest contributor to Sands China’s non-gaming revenue for the period, at US$104.7 million – an increase of 17.5 percent from a year earlier.

On Saturday, Sands China officially opened the newly-renovated mezzanine level at its high-end mall at the Plaza Macao, where Four Seasons Hotel Macao is located. As part of the HKD100 million (US$12.9 million) revamp project, seven new duplex stores were created, adding 39,000 square feet (3,623 sq. metres) to the mall’s total retail space, which now stands at 260,000 sq ft and houses over 140 brands in total.

Reinvesting in the mall was an “easy” decision, since it is “getting really good returns”, said Mr Sylvester. According to the Sands executive, the mall, branded as ‘Shoppes at Four Seasons’, boasts the world’s highest-grossing retail area, at over US$5,500 per sq. ft. on average.

“It is very profitable,” he pointed out.

The Saturday opening ceremony was attended by former football player David Beckham, who besides having a strong fan base in mainland China, is an ambassador for the Chinese Football Association. The former England captain and Las Vegas Sands have an ongoing partnership based around the development of dining, retail and leisure concepts for Asia, inked last year.

Sands China’s fourth shopping mall in Cotai, at casino resort Parisian Macao, is meanwhile almost fully leased. Mr Sylvester said tenancy commitments are already in place for 85 percent of the retail area. “We only have got just over a dozen shops left,” he added.

“The good thing for us with the Parisian is that we have differentiated it,” Mr Sylvester said. “Everyone else is trying to get all these luxury brands [into their new Cotai casino resorts]; we are not pitched at that with the Parisian – we call it ‘accessible luxury’, so it is more about creative fashion,” he explained.