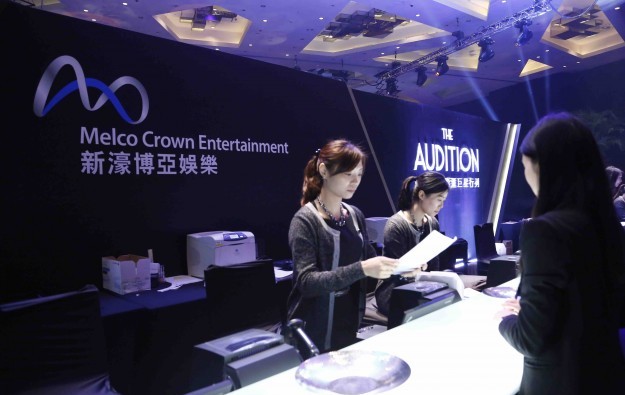 Several Macau gaming operators have stepped up the race to attract local talent to work at their casino resorts.

MGM China Holdings Ltd is inviting university graduates holding Macau residency to apply for its 2015 Management Associate Program. Successful candidates will be offered the opportunity to train in Las Vegas for 11 months, and for five months in Macau.

And on Tuesday, Melco Crown Entertainment Ltd announced it had launched a four-day recruitment fair (pictured) for Macau ID holders interested in working at its majority-owned US$3.2-billion Studio City scheme.

On January 12, at a press conference to announce the facilities at Studio City, Melco Crown’s co-chairman and chief executive Lawrence Ho Yau Lung said it was looking to hire “8,000 to 10,000” extra staff for the new Cotai resort. The firm said in its fourth quarter earnings in February that Studio City was expected to open in the third quarter this year.

Mr Ho said in a statement accompanying the job fair announcement, that the firm had managed in its Macau operations to offer “16,860 internal transfers and promotions” over the previous six years.

Macau’s chief executive, Fernando Chui Sai On, said in his November 2013 policy statement he wanted casino operators to step up their efforts to promote “local talents”.

MGM China, which is currently building the US$3-billion MGM Cotai scheme due to open in 2016, is 51-percent owned by MGM Resorts International, one of the biggest gaming operators in Las Vegas.

As part of the terms of the MGM China training scheme, successful applicants must commit to work for MGM China for two years continuously on completion of their training. In the Macau market, where unemployment at the end of January stood at 1.7 percent according to the Statistics and Census Service, retaining quality staff is as important as hiring fresh talent.

Grant Bowie, chief executive of MGM China, said the firm was “committed to developing and nurturing young talent for the hospitality industry”.