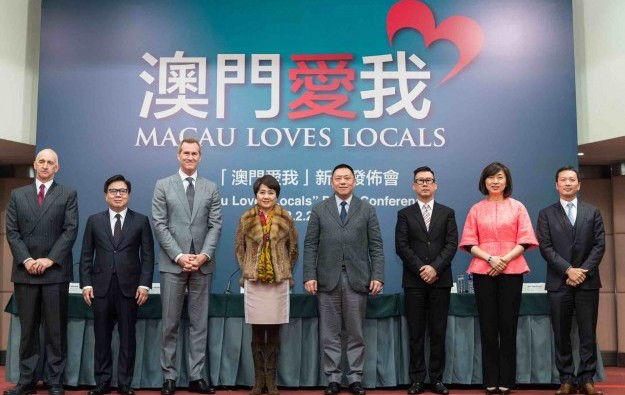 Macau’s six casino operators have come together to launch a major promotion campaign for its non-gaming offerings, targeting Macau ID holders. The campaign is described as a corporate social responsibility initiative of the six operators, aiming to give back to the community.

Covering a wide-range of non-gaming offerings, the “Macau Loves Locals” campaign features discounts of about 20 percent for hotel rooms, shows and entertainment, spas, restaurants, and other non-gaming elements.

Available until March 31, the city-wide promotion includes non-gaming facilities at all hotels and resorts operated by the city’s casino operators.

“I am very pleased to see the six operators… coming together for this first-of-its-kind campaign,” Macau’s Secretary for Economy and Finance, Lionel Leong Vai Tac, said at the launch ceremony on Tuesday.

“This joint promotion gives Macau locals the opportunity to enjoy unprecedented special offers on a wide range of non-gaming offerings … for a limited period, rewarding them with this promotion while at the same time promoting the development of the non-gaming sector in the city,” he added.

Mr Leong said the campaign was in line with the government’s strategy to promote diversification of the city’s economy. He added that the government would continue to encourage the use by casino operators of more services and products from local small- and medium-sized enterprises.

Senior executives of all the city’s casino operators also attended the launch ceremony. They said the campaign aims to encourage Macau residents to experience the non-gaming facilities offered by their companies. The industry executives additionally said that an extension to the promotion campaign could be discussed once the current campaign finishes on March 31, local media reported.

The long-awaited new outdoor theme park at Resorts World Genting, Malaysia’s only casino resort, is impressive, but likely to be “loss-generating due to heavy depreciation”, says a Thursday... END_OF_DOCUMENT_TOKEN_TO_BE_REPLACED