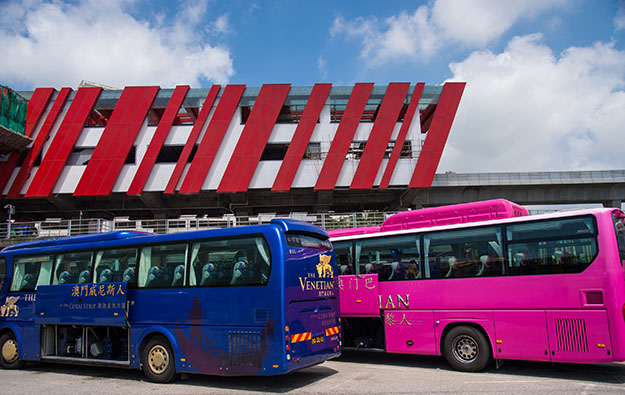 Macau casino operators have held talks with the city’s Transport Bureau about the possibility of jointly operating a shared shuttle bus service from the Macau boundary crossing area of the Hong Kong-Zhuhai-Macau Bridge – located on one of the bridge’s two artificial islands – to their respective properties, Sands China Ltd’s president and chief operating officer Wilfred Wong Ying Wai told reporters on Wednesday.

Such a plan aims to reduce the city’s traffic congestion, Mr Wong said. He was speaking on the sidelines of a ceremony to mark the 18th anniversary of the establishment of the Macau SAR.

“When the Hong Kong-Zhuhai-Macau Bridge comes into use … if the six casino operators run their own buses from there … this will only aggravate traffic congestion [in the city],” Mr Wong told reporters.

“We could instead just jointly run one or two routes [from the artificial island where the Macau boundary crossing area is located]. In Taipa, we already have a joint operation like that. We’ll cooperate with each other following this direction,” Mr Wong added.

Mr Wong was cited by Chinese-language newspaper Macao Daily News as saying that the casino operators are also considering new ways to further reduce the number of their coaches at certain locations, such as Border Gate, the main crossing point between Macau and Zhuhai.

The Hong Kong-Zhuhai-Macau Bridge will open to traffic in 2018, according to Hong Kong’s Chief Secretary for Administration, Matthew Cheung Kin-chung. The governments of the three places linked by the bridge have flagged that public and private transport movement on the bridge will be constrained by a quota system for buses and cars.

Regarding Hong Kong-Macao bus services, there will be an aggregate of 50 quota rights to operate services on a daily basis, including 34 for Hong Kong entities and 16 for Macau entities, according to a press release from the Macau Government Spokesperson Office on Wednesday.

The office’s statement additionally said that the three authorities would announce more details “in due course” once decisions on quotas for taxi services and for private vehicles are made.

MGM China Holdings Ltd’s chief executive Grant Bowie said on Wednesday that he was confident that the city’s six casino operators would “find the right answer” in collaboration with the government regarding the proposed shared shuttle bus service.

“In Cotai, the concessionaires are already working together for the Cotai Connection and there are other initiatives being considered. I think we need to make sure they work first, and then of course we will be announcing them to the public,” Mr Bowie told reporters.

The imminent return of package tours from mainland China will not only help boost Macau’s tourism businesses, but is also expected to help casinos gain more foot traffic in their mass gaming... END_OF_DOCUMENT_TOKEN_TO_BE_REPLACED