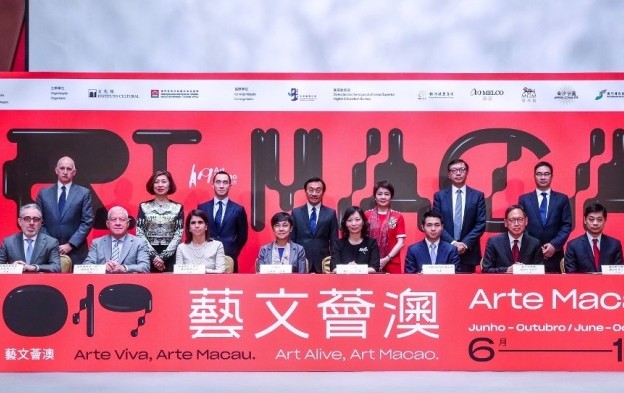 Macau’s six casino operators have pledged an aggregate of MOP18 million (US$2.2 million) to a local-government initiative called “Art Macao 2019”. It  features art-related and cultural events and runs from this month until October.

The six operators are each providing MOP3 million, and will hold art exhibitions in their respective properties during the period. Collectively their contribution is bigger than the MOP16.6 million being invested by the local government.

The information was given on Tuesday by Alexis Tam Chon Weng, Macau’s Secretary for Social Affairs and Culture. He was speaking to media on the sidelines of a signing ceremony held to mark the casino operators’ commitment to the project.

The government has repeatedly said it wants to see more non-gaming events and attractions offered by the Macau casino operators. The approaching end – in 2022 – of the current six casino concessions, and the expected new public tender for such rights, has created an environment where the operators seem to be keener than ever to prove their value to the local community, as suggested during a panel discussion at last week’s Global Gaming Expo (G2E) Asia 2019.

Macau’s art initiative will involve a total of 40 “large-scale events” including art exhibitions, cultural and musical performances, according to a Tuesday press statement released by the city’s Cultural Affairs Bureau. The tally includes events hosted by the Macau casino concessionaires in their respective properties.

As part of Art Macao 2019, Melco Resorts and Entertainment Ltd is to launch an art exhibition – running from June 6 to October 31 – called “Unexpected Encounters”, a showcase at City of Dreams Macau that includes contemporary art pieces such as KAWS’ “Good Intentions”, and Erwin Wurm’s “Fat Convertible”.

Macau operator MGM China Holdings Ltd is to launch an art exhibition called “Hua Yuan” at MGM Cotai from June 7 to September 3. It will feature artworks in ink as well as multimedia formats, from artists Wen Ma and Yang Yongliang.

Sands China Ltd is presenting a ceramics exhibition, “All That’s Gold Does Glitter – An Exhibition of Glamorous Ceramics”, across four venues: the Venetian Macao, the Parisian Macao, the Four Seasons Hotel Macao, and Sands Macao. The exhibition, which will take place from June 8 to October 9, will feature over 90 ceramic art pieces from artists representing an aggregate of 13 countries and regions, according to the casino firm.

SJM Holdings Ltd said it would present seven art exhibitions during the period June 13 to October 31. The art initiative launched by the group – “Art・Appreciation・Legacy” – will feature exhibits at the firm’s flagship property Grand Lisboa, as well as at Hotel Lisboa, the Jai Alai Oceanus complex, Ponte 16 and the Regency Art Hotel.