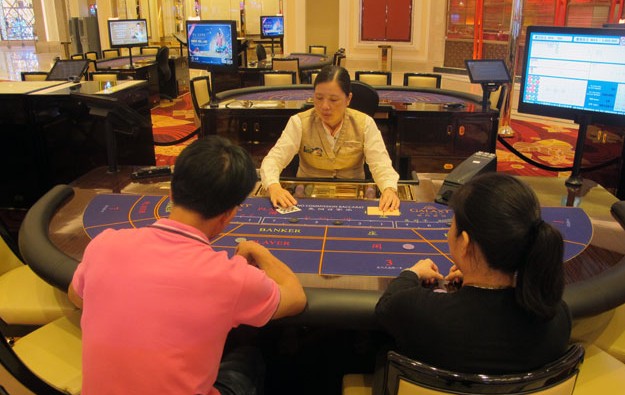 Casino gross gaming revenue (GGR) in Macau fell for the 22nd month in a row in March, confirmed data from the city’s casino regulator issued on Friday.

The result meant accumulated GGR for the first quarter of 2016 was nearly MOP56.18 billion, a 13.3 percent decline year-on-year from the same period in 2015.

On Wednesday Paulo Martins Chan, the head of Macau’s Gaming Inspection and Coordination Bureau, said he thought “the most difficult times are now behind us” regarding the city’s casino industry, and that he expected casino GGR for full year 2016 to fall “about 10 percent” compared to the previous year.

That would represent a 24 percentage point improvement on the circa 34 percent decline in Macau GGR for the whole of 2015.

Jamie Soo and Adrian Chan of brokerage Daiwa Securities Group Inc, said in a note on Wednesday regarding a recent uptick in Macau gaming names’ share prices: “The sector’s year-to-date rally was largely based on an understanding that a trend of stabilisation/pick-up, particularly in the mass segment, does, in fact, exist. However, actual realisation of this ‘trend’ remains an outstanding question.”

The Daiwa team added: “Our ground checks in Macau last week were sobering, with industry participants sharing an overall air of cautiousness about the sector’s near-term prospects.”

In a Wednesday note, Deutsche Bank AG analyst Karen Tang gave some commentary on a policy announcement this week from the mainland authorities – concerning an easing in visa application rules affecting some Chinese migrant workers wishing to apply for Individual Visit Scheme (IVS) permits to come to Macau or Hong Kong. Ms Tang described the rule changes as “very mild” with “impact likely limited”, when the market had been looking for an expansion of the IVS system coverage from the current 49 eligible cities.

She added: “We maintain our out-of-consensus view where we forecast Macau GGR to fall 8 percent in 2016 (versus consensus -2 percent) and reiterate our view that Macau GGR will not recover until second half 2017 (consensus expects GGR to recover in second half 2016).”

Macau’s casino gross gaming revenue (GGR) for the first five days of February is estimated at MOP1.9 billion (US$235.1 million) – or MOP380 million per day – a level that suggests a “45... END_OF_DOCUMENT_TOKEN_TO_BE_REPLACED