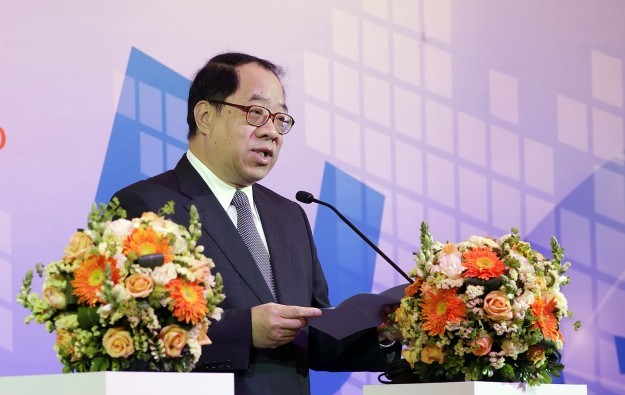 A senior government official confirmed on Monday that Macau gross gaming revenue (GGR) for October had fallen “more than 20 percent” when judged year-on-year.

Francis Tam Pak Yuen (pictured), Secretary for Economy and Finance, also said he expected some level of year-on-year slowdown to continue for “a period of time”, according to local media.

He made the remarks on the sidelines of an event to mark the 40th anniversary of Luso International Banking Ltd on Monday.

He was quoted saying: “The rate of [GGR] decrease will exceed 20 percent. Although it has already dropped for the fifth consecutive month, we still predict the slowdown of gaming revenue growth will continue for a period of time.”

Confirmation of the October numbers is expected on Tuesday from the local gaming regulator, the Gaming Inspection and Coordination Bureau.

A number of investment analysts had already indicated last week that GGR for October would be likely to fall by 21 percent year-on-year.

And Union Gaming Research Macau Ltd analysts Grant Govertsen and Felicity Chiang said in a note on Monday that a report over the weekend by Xinhua, an official Chinese news agency, that the central government was setting up a special office to deal with high-level corruption on the mainland, indicated “the anti-corruption drive is far from over and is likely to continue to impair Macau’s VIP market for a significant period of time”.

Karen Tang, director of Asia gaming and hotels research for Deutsche Bank AG in Hong Kong, said in a note on Tuesday that for investors in Macau casino operator stocks the worst might be over.

She stated: “We expect October GGR to fall 20 to 22 percent year-on-year, in line with market expectations. Recent trip observations suggest GGR trends may be stabilising. We now see October as the bottom of the GGR year-on-year down cycle, and expect a choppy recovery from November onwards. Historically, Macau stocks start to rebound when GGR bottoms.”

But she also added a note of caution.

“Key risk is investor reception on slowdown in mass [table gaming], which we estimate may have slowed sharply from 14 percent [growth] year-on-year in September to only low-single-digit year-on-year in October due to premium mass slowdown and [the] smoking ban.”

The latter was a reference to the ban on smoking on main gaming floor areas of Macau casinos that came into force on October 6.

According to publicly available data reviewed by GGRAsia, the widely trailed reports for October GGR decline would mean it represents the biggest year-on-year monthly drop since the Macau government started to issue GGR data in its current form in 2005.

Macau casino operator Galaxy Entertainment Group Ltd said in a Wednesday statement, in response to GGRAsia’s enquiry, that “there are no gaming promoters currently operating at Galaxy... END_OF_DOCUMENT_TOKEN_TO_BE_REPLACED