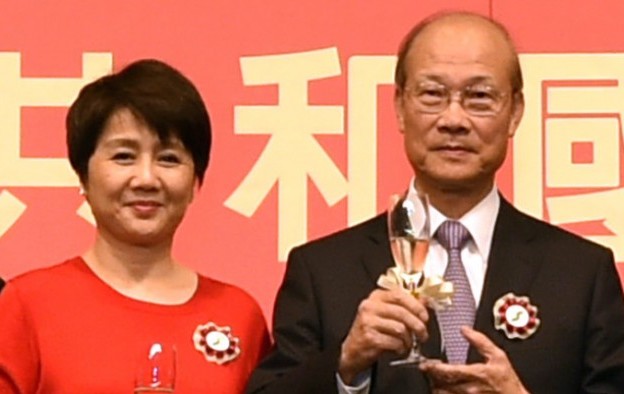 Casino gross gaming revenue (GGR) in Macau is starting to show some sustained performance in October, separately said on Thursday two senior executives from one of the concessionaires.

“This is a month [that gaming revenue] is starting to become stable,” stated Angela Leong On Kei (pictured left, in a file photo), an executive director of SJM Holdings Ltd.

She was speaking on the sidelines of a company event marking China’s recent National Day.

“At least there’s no more fall,” Ms Leong noted on Thursday referring to the Macau market.

“I hope that this trend can last: that we can see an increase [of GGR] by 1 percent to 2 percent [year-on-year in coming months]. But VIP is definitely not as good as mass [revenue],” added Ms Leong, fourth consort of SJM Holdings’ founder Stanley Ho Hung Sun.

Ambrose So Shu Fai (pictured right, in a file photo), chief executive of SJM Holdings, noted in comments at a second company reception the same day: “The indication is that it [Macau gaming revenue] has reached a turning point but it needs to be sustainable. So we need to watch for one or two more months whether this really forms a trend.”

Japanese brokerage Nomura said in a Thursday note on Macau: “While October 2016 is likely to ride on strong holiday demand, delivering 3 percent to 10 percent year-on-year gaming revenue growth, we remain cautious… the sector is trading at a peak-cycle valuation [for its stocks]…”

Information issued on Thursday by the Macao Government Tourism Office indicated that in the first five days of the Golden Week holiday period starting on China’s National Day on October 1, Macau received a total of 852,755 visitors, an increase of 8 percent from the prior-year period. Of those, 723,544 arrivals – or 84.8 percent of all arrivals recorded between October 1 and October 5 inclusive – were from mainland China. The cohort of such visitors was up by 7.3 percent from the prior-year period.

SJM Holdings CEO Mr So noted regarding Golden Week: “We saw that overall, the income is better. So from this perspective, they [visitors] have spent more. And we saw more visitation.”

SJM Holdings’ Ms Leong was also asked on Thursday whether an expected external “audit” citywide in the fourth quarter regarding Macau’s anti-money laundering policies might depress gaming revenues in that period.

Several investment analysts had mentioned in recent notes that the Financial Action Task Force, a Paris-based body, planned to conduct such an evaluation in the October to December period.

“We are not worried [about the AML review],” stated Ms Leong.

“The gaming industry in Macau is getting more diversified, and that helps the Macau economy to become more stable. This is good for Macau,” she added.

The SJM Holdings executive director was also asked by local media about some adjustments to her company’s policies on employee leave.

An announcement on Wednesday by the group said front-line staff and back office employees would receive time off in lieu should a mandatory public holiday designated by the Macau government clash with the person’s weekly leave.

If a mandatory public holiday date falls on a weekend – as will occur with Christmas Day this year – Macau, unlike Hong Kong, does not provide a weekday mandatory holiday by way of compensation.

Ms Leong said, referring to her company’s change on leave policy: “We have negotiated that for some time. We feel that we need to give more rest time to our staff, and make them happier.”

Asked why the change had not been made sooner, she added: “The economy has changed over time and we have got to make some corresponding changes in the remuneration policy.”

She gave no indication of what the change in leave policy would mean for the company in financial terms.

Mr So for his part said that a government ban on lifting work at the company’s under-construction Grand Lisboa Palace casino resort on Cotai – imposed following a fatal accident in September – had already been removed.

He added, regarding the project: “It is going as scheduled – we’ll complete the construction by the end of 2017.”

It is likely that Macau will shortly have a third round of citywide centre-based Covid-19 testing in little more than a week, after the results so far of a second mass test – that was due to finish... END_OF_DOCUMENT_TOKEN_TO_BE_REPLACED