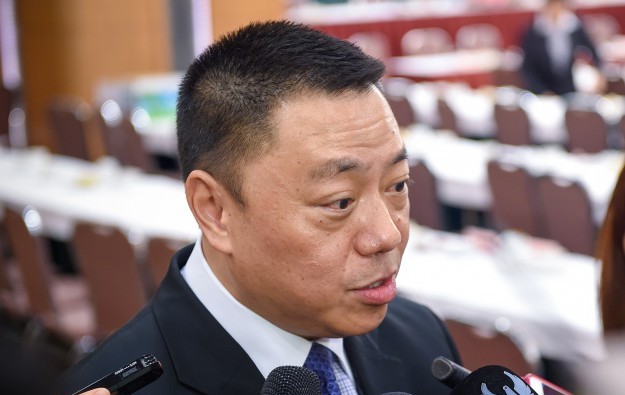 Macau’s Secretary for Economy and Finance, Lionel Leong Vai Tac, on Tuesday told reporters that the process concerning the “mid-term review” of the city’s gaming industry had been “slower than expected”. He attributed the delay in releasing the review to the “cautious processing” of the report data.

Speaking on the sidelines of the National People’s Congress meeting in China’s capital Beijing on Tuesday, the secretary (pictured) noted that his department was doing translation work relating to the mid-term review report. He did not specify a timetable for when the findings of the report would be released to the public.

In response to a question from a reporter about when the review would be submitted to Beijing, Mr Leong said “definitely” before the end of this year.

“I think the central government is very keen to see a healthy development of Macau’s gaming industry, and [to see] whether the industry can support the city as a world tourism and leisure centre,” Mr Leong stated.

He added: “We’ve always said this report can provide the basic data for us to understand how Macau’s gaming industry should develop.”

Mr Leong said there had been a “cautious processing” of the report data, especially data related to legal issues, and that there had been a “slower than expected” pace to the mid-term review exercise. He had previously mentioned in a public statement that the results of the mid-term review would be publicly announced “early this year at the latest”.

The mid-term review began in May last year. According to previous comments by Macau’s Chief Executive, Fernando Chui Sai On, the mid-term review of the gaming sector was due to cover eight topics, namely: “development of the gaming industry; its economic impact on Macau; its impact on small- and medium-sized enterprises; its impact on Macau’s society; the relationship between the gaming and non-gaming sectors; whether gaming operators are complying with the terms in their contracts; the operations of gaming companies; and whether gaming operators are fulfilling their social responsibilities”.

Paulo Martins Chan, the head of the city’s casino regulator, the Gaming Inspection and Coordination Bureau noted – in comments to public broadcaster TDM’s Chinese-language radio service in January – that junket management had been added as a ninth topic for the mid-term review.

The Macau government has previously said that how each of Macau’s six casino operators scores in the review will have no direct impact on whether or not the government would refresh gaming rights for them. The current concessions expire on varying dates between 2020 and 2022. But Mr Leong has admitted that negotiation on the specific terms under which any such renewals might take place would be based on the mid-term review’s conclusions.

Most of Macau’s casino operators are likely to generate positive free cash flow in the first quarter, given the robust recovery level of mass-market gross gaming revenue (GGR) in January, relative... END_OF_DOCUMENT_TOKEN_TO_BE_REPLACED