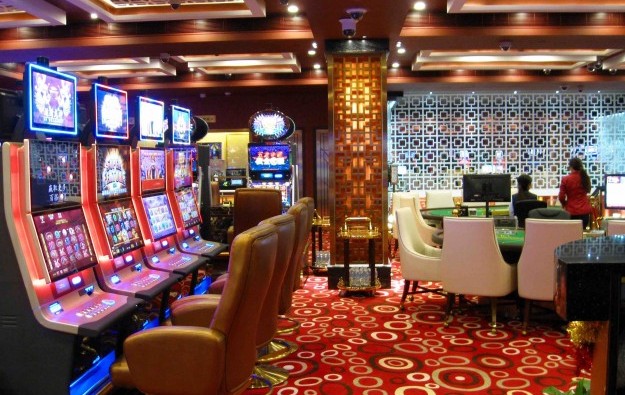 A Macau casino venue focused on VIP baccarat gambling has opened a high limit bet slot club with 100-plus slots.

A spokesman for the firm said to be organising the club told GGRAsia the idea is to appeal to player agents that up until now have typically focused on recruiting VIP table games players.

The new club aims to do so by offering the agents commission to bring in high volume slot players, just as agents working with table games junkets can earn commission from bringing in high value baccarat players.

VIP slot players recruited for the new facility – called Grand Prize VIP Club (pictured) – will be eligible for what the organiser termed “rebates”. It is not clear what form such rebates would take, for example cash refunds or fresh credit for further play. But they will be calculated based on the number of player points that will be acquired and recorded on each player’s membership card. The acquisition of player points will be linked to the volumes of cash that the player bets, said the organiser.

“We believe the opening of this slot parlour could be indicative of a segment of the industry (i.e. junkets) that is very much in need of revenue and willing to try an idea that in a different era would likely not have even been considered,” Grant Govertsen, an analyst at Union Gaming Securities Asia Ltd, said in a note on Sunday.

The new club is at Jimei Casino, a property that operates under the gaming licence of SJM Holdings Ltd on Macau peninsula. Edmund Wu, of a company called Inteluck Group, told GGRAsia it has organised the new slot club at Jimei Casino under what he described as a cooperation agreement with the Jimei Group.

Such cooperation might be extended to other junket investors if their affiliates have high value slot players on their books or are seeking to recruit them, said the Inteluck representative.

Jimei Group is a term used to describe some gaming business interests of Jack Lam Yin Lok, a veteran investor in the Macau junket sector. A corporate website describes Jimei Casino as part of Jimei Group’s “entertainment business in Macau”.

Union Gaming said it believes Jimei Casino to be “one of the lower-performing third party properties in Macau”, that offers few other amenities within the casino.

“As such, it could be a tough sell to attract and retain players based solely on having VIP slots on offer,” said Mr Govertsen.

The idea of Grand Prize VIP Club, said the organiser, is to make the product offer for VIP slot players more attractive than that available from the major casino venues in Macau, where the relationship between the player and the house is managed by a marketing person directly employed by the casino.

The precise levels of the agent commissions and player rebates that will be available at Grand Prize VIP Club are said to be still under discussion. Buy-ins for slot play will be done in the standard way for such gambling in Macau – via cash fed into the machines or the use of a printed voucher.

The business model of the new club must also take into account Macau’s Electronic Gaming Machine Technical Standards, whereby slots in casino gaming venues in Macau must be set to a mandatory minimum return to player (RTP) – i.e., the percentage of all the wagered money a slot machine will pay back to players over time – of 80 percent, and a maximum RTP of 98 percent.

The dynamic of the newly opened VIP slots room “could hold some level of appeal to existing slot players, albeit at the expense of lower margins relative to the typical 40-percent-plus EBITDA [earnings before interest, taxation, depreciation, and amortisation] margin on slots,” suggested Union Gaming’s note.

Casino gross gaming revenue (GGR) from slot machines market wide in Macau in the first nine months of 2015 – the most recent official data available – stood at approximately MOP8.81 billion (US$1.10 billion) or 5 percent of Macau’s aggregate GGR for the period, which stood at nearly MOP176.02 billion. But the 2015 slot GGR for that period represented a 22.1 percent fall from the MOP11.31-billion slot revenue gross from the first nine months of 2014.

The possibility of heating competition between Macau’s junket operators and the casino operators – for access to Macau’s high limit slots players – comes during a period of intense pressure on the VIP table gambling segment. The latter saw huge expansion in revenues coinciding with the liberalisation of outbound travel rules for mainland China residents in the early 2000s and the liberalisation of the Macau gaming industry to a six-operator market in 2002 from a previous monopoly setup.

But GGR from VIP baccarat declined by 38 percent year-on-year in Macau in the first nine months of 2015, hit by factors including China’s anti-graft campaign and a slowing of China’s underlying economy, according to investment analysts.

Macau’s casino regulator, the Gaming Inspection and Coordination Bureau, does not give in its official industry data a breakdown between GGR from high limit slot play and that from mass-market slot play. There has however been commentary from a number of industry analysts that the customer profile of Macau’s slot segment has been similar to the table games market, in the sense that a numerically small number of players have been providing a major portion of the revenue.

Union Gaming said the more likely result of the opening of the new VIP slots room could be a “near-term disruption on the Macau peninsula as premium slot players may trial the new facility (either out of curiosity, or perhaps even a sense of obligation to the principals of the new VIP slot parlour)”.

“With this in mind, we would not be surprised if high-limit slot revenues at properties like Wynn Macau, MGM Macau and Grand Lisboa were to experience some softness in the first quarter of 2016,” said Mr Govertsen.

It is not the first time in Macau that slot machines have shared the same space as a VIP table facility. More than six years ago, VIP gaming investor Neptune Group Ltd installed some of Aristocrat Leisure Ltd’s popular Cash Express slot machines in a VIP area Neptune operated at Galaxy Entertainment Group Ltd’s StarWorld property.

The imminent return of package tours from mainland China will not only help boost Macau’s tourism businesses, but is also expected to help casinos gain more foot traffic in their mass gaming... END_OF_DOCUMENT_TOKEN_TO_BE_REPLACED