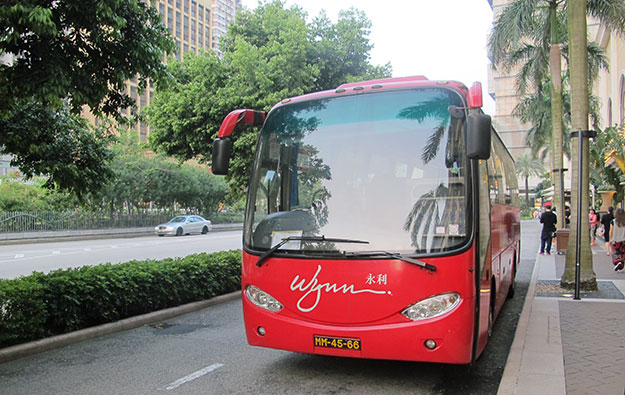 Eleven casino shuttle bus routes in Macau have been cut and 10 routes have been “optimised,” as part of a move to reduce eventually the number of such buses on the city’s roads by 20 percent, said the city’s Transport Bureau in a written reply to questions from GGRAsia.

It was reported in February by local media, that Macau’s Traffic Affairs Consultative Committee had recommended a reduction in the number of such services on the basis the vehicles were taking up road space that could be used for public transport.

“The Transport Bureau has been communicating and coordinating with the gaming operators to reduce the casino shuttle buses,” a bureau spokesperson told GGRAsia.

“After various negotiations, the six gaming operators have cancelled some routes linking Cotai and the old town of Taipa,” said the person, referring firstly to a reclaimed land area in Macau assigned to new casino resorts, and secondly, to Taipa, a dormitory settlement next door to Cotai that is home to many casino workers and other professionals.

The transport bureau said casino operators had also altered their shuttle bus timetables “according to peak and non-peak hours, merged the routes for Taipa Temporary Ferry Terminal and the Macau International Airport, and started cooperating [on] some routes.”

The transport bureau further stated: “In an attempt to further reduce the shuttle bus routes, the six gaming operators have already submitted new plans that will come into effect soon. Overall, the new measures will account for 10 percent [cuts initially] and 20 percent cuts [ultimately].”

Some of the most heavily used casino shuttle buses are those linking the Cotai resorts with Macau’s ferry ports and the border gate at Gongbei.

SJM Holdings Ltd – which does not yet have an operational casino on Cotai – is to make the largest cut in percentage terms in its shuttle routes. Ultimately it will reduce such routes by 42 percent, from 12 originally, to seven.

Sands China Ltd, the casino firm with the largest number of routes, is to cut 19 percent of them, leaving it with 17 from the 21 it had originally.

Melco Crown Entertainment Ltd, which has no casino resorts in downtown Macau, is making the smallest number of route cuts, losing one route, leaving it with 13.

“In relation to the influence of the reduction of casino buses on the public bus service, we have yet to analyse the operation of the two sectors,” the transport bureau told GGRAsia.

“This bureau will pay close attention to the situation after [all] the reduction measures come into effect. Data will be collected and a review will be conducted at an appropriate time,” added the bureau.

A number of investment analysts have noted that public transport capacity in some parts of Macau has lagged the growth of the tourism market. In February it was reported that the transport bureau would newly offer 250 taxi licences via public tender this month.

The Taipa section was previously slated to start operating this year. The bulk of construction on that stretch of the system began in 2012.

A number of Macau luxury hotels inside casino resorts still had, as of Thursday, rooms available for every night of the upcoming week-long Chinese New Year (CNY) holiday period, according to checks... END_OF_DOCUMENT_TOKEN_TO_BE_REPLACED