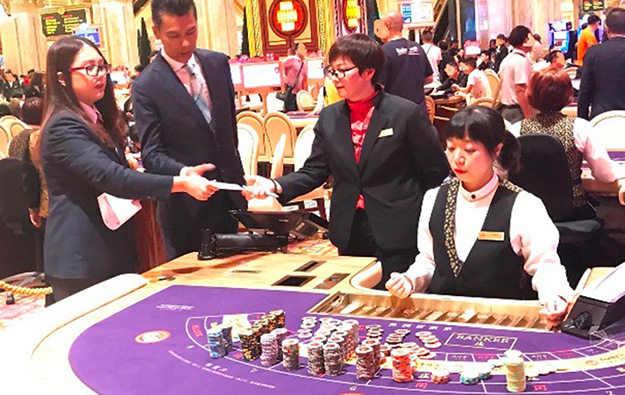 Macau’s casino regulator, the Gaming Inspection and Coordination Bureau, said in a Wednesday statement that it “recently” held with the city’s six gaming companies a simulation drill on possible responses to a typhoon emergency. The goal was to gauge the local gaming industry’s readiness for this summer’s typhoon season.

The local gaming regulator – also known as DICJ – said the typhoon drill included a total of six casino properties. The press release added that during the exercise (pictured), the parties involved tested procedures related to the suspension and then resumption of gaming operations at live gaming tables.

The casino regulator said the drill had been designed to assess the ability of the public sector and the local casino industry to coordinate and handle typhoon-related emergencies.

The gaming regulator said in its Wednesday press release the test “achieved the expected results”, although didn’t spell them out. The gaming bureau added that such a contingency drill could help improve the overall response to typhoon-related emergency situations in Macau’s casino industry.

About a month ago, DICJ met with representatives from the city’s gaming companies to discuss contingency plans for this summer’s typhoon season. At the time, the local gaming regulator advised that firms “regularly assess” any of their casinos or other betting outlets that were located in what DICJ termed low-lying areas – or that could be “easily impacted” by wind and rainfall. The gaming bureau had advised firms with such venues to formulate appropriate measures to deal with the effects of a typhoon.

Macau’s Meteorological and Geophysical Bureau forecast in March this year that between four and six typhoons could come within an 800-kilometre (500-mile) radius of Macau during 2019. The first such severe storm to impact Macau was recorded earlier this week. The 2019 typhoon season might run until early October, according to the weather bureau.

Typhoon Mangkhut, which occurred in September last year, brought about the precautionary closure of all casinos in the city – the first such pause in the modern era of casino gaming in the city. The temporary stoppage was agreed by the city’s government and the six operators of Macau casinos.

The government said afterwards that it had yet to consider whether to make such closures mandatory when a strong storm threatens Macau.