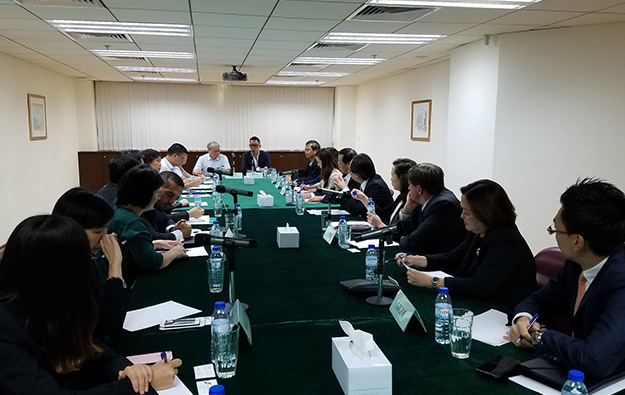 Macau’s casino regulator has called on the city’s gaming operators to improve their staff arrangements during typhoons. The call was made during a Friday meeting (pictured) with executives from the city’s six operators, also attended by representatives from the government’s Labour Affairs Bureau.

The Gaming Inspection and Coordination Bureau, also known by its Portuguese-language acronym DICJ, said in a Friday press release issued after the meeting that it paid close attention to the safety – during typhoons – of casino patrons and casino workers, especially while the latter were commuting to work.

The bureau’s call comes after Typhoon Hato hit Macau on August 23. Due to the tropical storm – which brought with it winds of more than 200 kilometres per hour (124 mph) – some hotels and casino resorts temporarily suspended their operations, as they sustained damage and suffered power cuts and interruption to water supply.

Some casino operators – especially Galaxy Entertainment Group Ltd – came under some criticism via social media and via local labour groupings following the storm in regard to purported arrangements for front-line staff concerning Typhoon Hato and its aftermath.

The gaming bureau said in its Friday release it had requested casino operators to “handle in a humane way” cases involving front-line staff affected by the typhoon that arrived late or did not turn up for work on August 23. The release stated the gaming operators’ representatives told DICJ their respective firms had handled such cases in a considerate way.

Tropical Cyclone Warning Signal No.10 – an extremely rare event – was raised in Macau just before noon local time for Typhoon Hato. The No.8 Signal is enough to trigger the cancellation of road, air and ferry transport. Typhoon Hato was the strongest recorded storm in Macau for 53 years, said the city’s government.

The DICJ release added that gaming operators pledged to strengthen dialogue with staff and improve staff arrangements during typhoons.

Cash donations totalling MOP215 million (US$26.7 million) had been pledged by Macau casino companies as of Friday for relief efforts to deal with the effect of Typhoon Hato, in addition to the firms mobilising staff to work as volunteers in community clean up.

“Right now, our top priority is to get all of Macau to stand tall again so that all of us are better prepared and more resilient for the future,” said Lawrence Ho Yau Lung, chairman and chief executive of one of Macau’s casino operators, Melco Resorts and Entertainment Ltd, in a Friday release from the company.