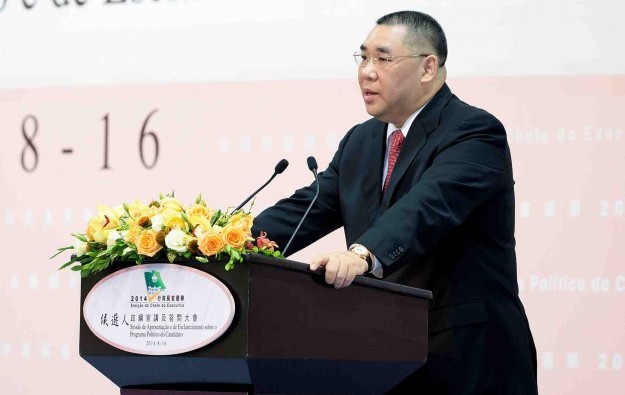 The measure is included in Mr Chui’s political manifesto for a second five-year term. He is running unopposed for the city’s top political post.

Mr Chui has yet to elaborate on what he means by demanding casino operators to “facilitate” the provision of housing and transportation to their migrant workers, know locally as ‘non-resident workers’ or ‘blue card holders’.

The existing rules in Macau oblige all companies to provide housing to their migrant workers or pay them a monthly housing allowance of at least MOP500 (US$62.6) – the amount was set in 2010.

The latest official data on rentals in Macau, included in the 2011 Census, show that letting a house cost on average MOP4,169.

Several gaming operators, especially those with properties in Cotai, already provide shuttle services to their workers, locals and migrant.

The chief executive in Macau is elected by a committee of 400 people, mostly composed of pro-business and pro-Beijing figures. No member is directly elected by the people of Macau.

The document also says one of Mr Chui’s goals for the next five years is to go ahead with the renewal process of the current casino concessions. No further details on this matter are included.

The Macau government has stated for several times it intends to start examining the renewal of the concessions between 2015 and 2016. Macau’s six casino concessions expire between 2020 and 2022.

Mr So told reporters over the weekend it was the first time he had heard Mr Chui propose gaming operators should provide housing and transportation to migrant workers. He said SJM Holdings was open to discuss the idea but said that to do so, gaming companies would likely need to be granted land to build housing complexes.

In a question-and-answer meeting on Saturday with the members of the election committee, Mr Chui stated he would maintain the prohibition of gaming operators importing workers for dealer positions. But he urged local casino staff to work hard to upgrade their skills, to get promoted to higher positions.

Casino workers in Macau have held several protests over the past month, demanding better pay and improved promotion policies.

Mr Chui also said he would keep the current government model, featuring five secretaries – but some of his top aides will likely not be re-appointed.

It is unclear whether Secretary for Economy and Finance Francis Tam Pak Yuen, who oversees the gaming portfolio, will be invited for a new term. He has been in office for 15 years.

Talking about the recent slowdown in the city’s gaming industry, Mr Chui said the sector was undergoing a period of consolidation. Instead, he focused his speech on the need to push ahead the city’s economic diversification.

Since June, Macau has posted two consecutive months of declines in market-wide casino gross gaming revenue – a first in over five years.

Pragmatic Play Ltd, a content provider to the iGaming industry, has launched a new slot game called “Monster Superlanche”. The game is played across 6×5 reels, with colourful ‘monsters’... END_OF_DOCUMENT_TOKEN_TO_BE_REPLACED