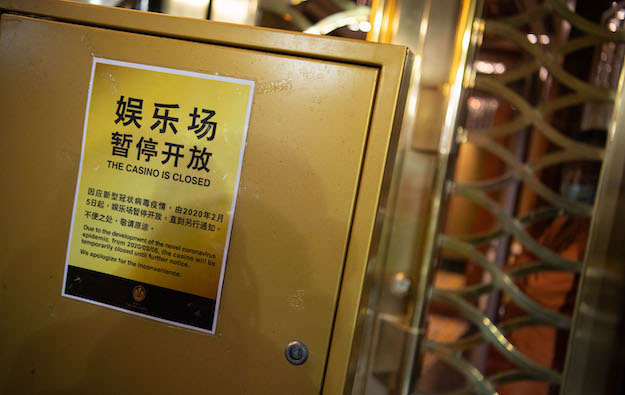 The Macau government has decided not to extend the current closure of the city’s casino industry. So said Lei Wai Nong, the city’s Secretary for Economy and Finance, during a Monday government briefing. The existing 15-day shutdown runs until February 19 inclusive.

Mr Lei added that the city’s 39 active casinos would not be obliged to immediately reopen starting 00.00 on Thursday. Operators would be given a period of up to 30 days to resume casino operations.

All workers and patrons at the city’s casinos will have to wear protective face masks, a measure that had been introduced prior to the casino closure order.

The Macau government said on Monday additional measures, including adjusting the minimum distance between gaming tables, would be introduced at casinos to ensure the safety of workers and clients. The number of gaming tables allowed to open for business at each casino would also be reduced, Mr Lei added, without providing further detail.

From February 5, Macau closed all of its casinos – and its other major centres of entertainment – in an effort to prevent a novel coronavirus spreading locally. There was a total of 10 confirmed cases within Macau as of Monday, with five patients – all tourists from Wuhan, in Hubei province, the centre of the outbreak – having recovered and gone home after treatment in a Macau hospital. No new cases have been reported in Macau since February 4.

Sanford C. Bernstein Ltd said in a Monday note following the Macau government announcement that the local authorities had “not fully made public” all the new measures to be implemented at casinos upon reopening. The brokerage however highlighted that “customer inflow will likely be very limited in near term”.

Analysts Vitaly Umansky, Eunice Lee and Kelsey Zhu added, commenting on the period of up to 30 days for operators to reopen their respective casinos: “It is our understanding that some operators had asked the government to continue with the shutdown due to anticipated very low business, but other operators were more eager to open.”

During Monday’s press conference, Mr Lei said the 30-day period offered to operators to reopen their respective casinos also aimed to work as a buffer, as some operators “don’t anticipate much visitor traffic” following the end of the closure order. Operators would have to apply to the government to extend the suspension of their respective operations beyond February 19, said Mr Lei.

Sanford Bernstein stated that, “even with the casinos reopening, there will still be a dearth of customers.” Data provided by the Macau government showed that the city had welcomed just about 2,800 visitors on Sunday, with about half from mainland China.

“Until the suspensions are lifted, most mainland Chinese customers will not be able to enter Macau,” said the Sanford Bernstein team. They added: “There is no clarity at this time from China, when such travel may begin to be permitted.”

Secretary Lei said during Monday’s briefing that the government’s decision to allow casinos to reopen followed an assessment of public health risk posed locally by the Covid-19 coronavirus crisis. He also noted that the casino sector was very important for the city’s labour market, employing around 84,000 people.

The casino closure order is having a significant negative impact on casino operators in Macau. During a conference call with investment analysts last week, management at MGM Resorts International said the closure of the group’s two Macau casinos was costing it US$1.5 million a day, the “majority” of that comprised of staff pay.

During Monday’s press conference, the Macau government also announced that non-resident workers entering Macau from mainland China would have to undergo a 14-day quarantine period and obtain an official medical declaration issued by a recognised entity in the neighbouring city of Zhuhai, stating they were free of the coronavirus, before being allowed to enter the city. The move aimed to lower the risk of “cross-contamination” of the viral pneumonia, namely by reducing the number of people crossing the border between Macau and Zhuhai, where most of these non-resident workers that live outside of Macau reside.

Casino operators in Macau employ a significant number of non-resident workers accross a range of positions, except croupiers – only locals are entitled to deal cards at the city’s gaming floors.

Macau mass-market casino gross gaming revenue (GGR) for the recent Chinese New Year (CNY) holidays could have recovered to at least 60 percent of that for the 2019 break, when the festivities were in... END_OF_DOCUMENT_TOKEN_TO_BE_REPLACED