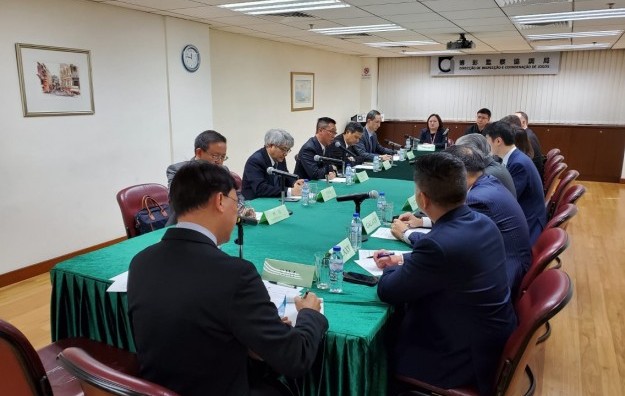 The Macau authorities have alerted the city’s casino operators to take preventive measures – including body temperature checks of patrons – against the risk that infectious disease might enter their venues and spread in the community.

The city’s Health Bureau said in a Thursday statement that the direction was in response to an alert about “several cases of viral pneumonia of unknown origin” in mainland China’s Wuhan, the capital city of Hubei province in the centre of the country.

Macau’s statement said Health Bureau director Lei Chin Ion – and officials from the local casino regulator, the Gaming Inspection and Coordination Bureau – had a briefing on the topic on Thursday with casino representatives (pictured).

The officials advised the casino firms to install what the release called “temperature-screening devices” at all entrances to their properties. The announcement didn’t clarify whether such devices should be hand held by door staff or should be standalone equipment.

Mr Lei was also cited in the release as suggesting that if casino staff or clients showed signs of fever, they should be asked whether they had been – within 14 days of the onset of symptoms – in Wuhan. Anyone confirming they had, should be sent immediately to hospital for a check-up.

In a separate Thursday statement, the Health Bureau said it was stepping up inspection measures at all of the city’s border checkpoints – especially at Macau International Airport – in response to the reports of viral pneumonia in Wuhan.

On Tuesday Reuters news agency reported that People’s Daily, a Chinese state news outlet, had said on Chinese social media outlet Weibo that the cause of the Wuhan illness cases was “not clear”.

An outbreak of Sars, which affected southern China in late 2002, spread in 2003 to places outside China. Between November 1 2002 and July 31, 2003, a total of 8,096 people was infected worldwide, and 774 of those died – a mortality rate of 9.6 percent – according to information on the World Health Organization website.

Xinhua, an official Chinese news agency, reported on Monday that a statement from Wuhan Municipal Health Commission said influenza, bird ‘flu, adenovirus, Sars and Middle East respiratory syndrome (Mers) had all been ruled out following tests on the Wuhan patients. The announcement had added that 59 cases of viral pneumonia of unknown origin had been reported in that city.

South Korea on Thursday said it would from June 1 resume issuing short-term tourism visas for trips to the country’s mainland, for individual visitors and groups of tourists. Permits for... END_OF_DOCUMENT_TOKEN_TO_BE_REPLACED