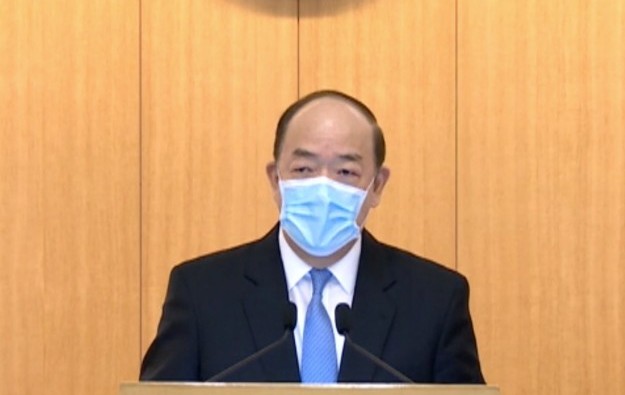 Macau’s Chief Executive, Ho Iat Seng (pictured in a file photo), said over the weekend he believed China’s central government would continue to be “very supportive” of the city: he declined to comment on questions from local media about possible negative impact on the city’s casinos stemming from the country’s move to criminalise promotion to mainland residents, of gambling “overseas”.

Mr Ho was speaking on the sidelines of a public event on Saturday. He noted he would “not make a judgment” on proposed amendments to China’s criminal law, noting it was still “under discussion” at the country’s Standing Committee of the National People’s Congress.

A report from a state-run media outlet in China said last week that the committee was considering a move to create a specific crime of “organising and soliciting by casinos abroad”, means by which mainland residents could be taken overseas to gamble. The amendment also reportedly featured adjusted penalty terms for the existing crime of “establishment of casinos” within the mainland.

But the report did not detail the proposed penalties either for the new crime, or for the new penalties for the existing crime of setting up mainland casinos; nor when the proposal would be likely to come into effect.

On Saturday, Wilfred Wong Ying Wai, president of Macau casino operator Sands China Ltd, said at a separate event – in response to questions – that he did not believe any such amendment of China’s criminal law, would result in a  “bigger impact” – than currently seen in relation to Covid-19 and also capital controls – on Macau’s gaming revenue trend.

“Now China has been strengthening the control over capital flow, and the impact of that has already been reflected [on Macau’s gaming revenue trend]. There should not be any bigger impact from the new… legislation [on the mainland] … on the gaming revenue trend here,” Mr Wong remarked to local media.

While acknowledging “critical” times in the local gaming industry, he expected gradual improvements. He also said the company was not considering imposing any staff lay-offs amid the downturn. Sands China faces – in common with the other six Macau operators – expiry in June 2022 of its current Macau gaming rights, and the likelihood of a fresh public tender. The city’s Chief Executive had called on casino firms not to lay off workers during the downturn linked to the Covid-19 crisis.

In other developments, Wong Fai, director of the Travel Industry Council of Macau, told GGRAsia on Friday that a suggestion of extending from seven days to 14 days, the validity of the Covid-19 test required of mainland visitors for quarantine-free access to Macau, would not make much difference to consumer demand, as most mainlanders only had exit permits to Macau, valid for seven days.

More useful, he suggested, would be if the Macau authorities were able to negotiate with the mainland ones, for resumption of the mainland’s automated tourist visa application process for the Macau-bound travellers.

The issuance of exit visas for Chinese tourists bound for Macau, now required more working days compared to before the pandemic crisis, as mainland residents now have to apply for the visas in person and go through a manual application process at a relevant government office on the mainland.

Paradise Co Ltd, an operator of foreigner-only casinos in South Korea, reported casino revenue of nearly KRW48.65 billion (US$39.8 million) for January 2023, according to a Thursday filing to the... END_OF_DOCUMENT_TOKEN_TO_BE_REPLACED