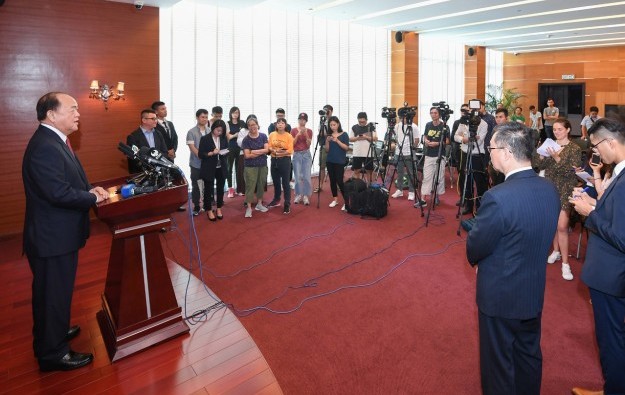 Macau’s Chief Executive-elect Ho Iat Seng (pictured left) said on Tuesday that he would submit to China’s central government a proposed list of names for his government by “the end of October to early November”.

Mr Ho made the remarks to local media on Tuesday prior to his departure to Beijing. On Wednesday, Mr Ho received the formal confirmation from China’s Premier Li Keqiang for his appointment as Macau’s fifth-term chief executive. The Macau leader-in-waiting met Mr Li on Wednesday morning.

Mr Ho, a businessman and former president of Macau’s Legislative Assembly, was endorsed as the city’s new leader in August via a committee of 400 people, mostly composed of pro-business and pro-Beijing figures.

Mr Ho will take office on December 20, when the current Chief Executive, Fernando Chui Sai On, steps down. The city’s other top officials – the government five secretaries that head different areas of the city’s administration – will also take office that month.

On Tuesday, Mr Ho said he had not yet made up his mind regarding the composition of his team. He stressed three major qualifications he would take into consideration for appointing individuals to such positions would be: the person’s integrity; their ability to perform the required work; and whether he or she would be able to communicate effectively with members of the public.

Speaking to local media on Monday, Mr Leong pledged that he would work to ensure a a smooth transition to a new administration. He declined to say if he would remain as the Secretary for Economy and Finance in Mr Ho’s government, according to local media reports.