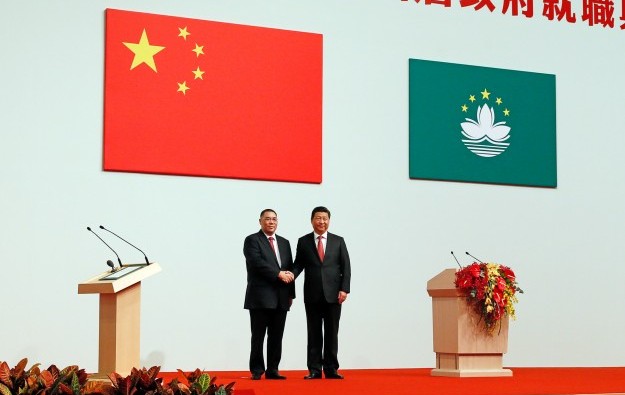 Macau’s Chief Executive, Fernando Chui Sai On (pictured left), on Saturday said his government would in the spring “undertake a review” of the city’s casino industry.

It followed remarks by China’s President Xi Jinping (pictured right) calling for Macau to show “greater courage and wisdom” to “strengthen and improve regulation and supervision over the gaming industry”.

President Xi made his comments during an official two-day visit to the territory to mark the 15th anniversary on Saturday of Macau’s return in 1999 to Chinese administration from that of Portugal.

On Saturday Mr Chui’s new government was sworn in for his second and final five-year term. A new line up of senior officials could present an opportunity for Macau’s administration to review its approach to the local casino industry. The Chief Executive has replaced all the secretaries as well as other top officials in the government in a revamp first announced on December 1.

Investors are now very familiar with the Chinese leadership’s call for diversification of Macau’s economy – seen in part as a sign that gambling revenue must play a more modest role in the growth of the local tourism industry. But a number of investment analysts have also said it’s worth paying attention to subtle changes or additions to official language.

One such mood change was the direct linkage – made in early December by a senior Chinese official – of the moderating of Macau gambling with the national interest of China.

And the country’s president during his visit indicated official concern is not only about cross border money transfer out of China, but also how the prosperity brought to Macau – as the middleman for such high volumes of cash – has created imbalances in local society.

“Some deep-rooted conflicts have started to emerge as Macau proceeds with its development,” said President Xi.

Unrest and demonstrations in neighbouring Hong Kong over its political and economic development has led Chinese officials to issue criticism tempered with calls for analysis of that city’s issues.

But in the short term the leadership’s main focus in Macau appears to be on inward money flows.

Investment analyst Cameron McKnight of Wells Fargo Securities LLC in New York said in a note on Friday his institution expected no let up in China’s nationwide anti-corruption campaign.

Mr McKnight wrote: “[The] Anti-corruption campaign remains popular in China. While there are relatively fewer comments on Chinese Twitter (Weibo) than there were in August at the height of the campaign, each round of monthly revenue results from Macau triggers new commentary on the ongoing erosion of high-roller gamblers.”

The analyst added: “Popular comments included: (1) praise for the Chinese government for its campaign, and (2) predictions of the downfall of Macau’s gambling industry. Our checks indicate that the [anti-corruption] campaign will continue in earnest for some time.”

There was some brighter news from President Xi’s visit. Bloomberg News reported Aaron Fischer of brokerage CLSA in Hong Kong saying that Mr Xi’s pledge to demarcate the maritime zones of Macau could give the government of the land-hungry city more control over land reclamation. Lack of space is seen as one of the factors that has so far inhibited Macau’s ability to develop non-gaming business and house its growing population of migrant workers.

Most of Macau’s casino operators are likely to generate positive free cash flow in the first quarter, given the robust recovery level of mass-market gross gaming revenue (GGR) in January, relative... END_OF_DOCUMENT_TOKEN_TO_BE_REPLACED