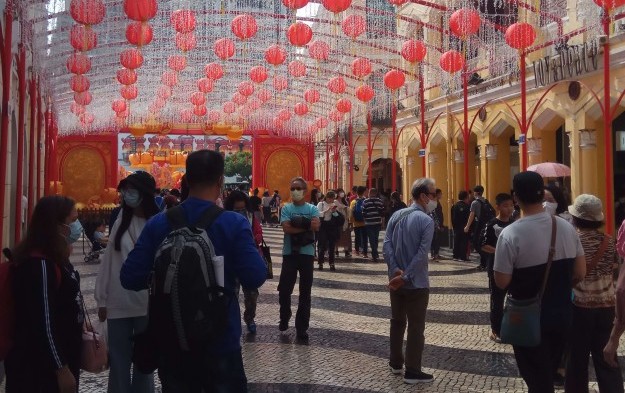 The tally of tourists visiting Macau fell 60.5 percent year-on-year in the first three days – i.e. Friday, January 24 to Sunday, January 26 – of the Chinese New Year (CNY) festive period. The decline coincided with news of several instances of coronavirus infection – the first case being announced on January 22 – among visitors to Macau, namely people from Wuhan in Hubei province in mainland China.

The Chinese New Year period is normally a key trading period for Macau’s casino industry. The festival had in the previous three years accounted for circa 6 percent of Macau’s annual gross gaming revenue (GGR), noted one brokerage in a Monday memo.

There were seven confirmed cases of coronavirus in Macau as of Monday. The city’s government had announced on Thursday it was cancelling all public celebrations for Chinese New Year and urged associations and the private sector to call off or postpone large gatherings, as part of efforts to stop the spread of the sickness within the community. Starting from last week Macau casino workers have also been instructed by the local gaming regulator to wear protective facial masks.

On Sunday, the Macau government additionally announced that – with effect from the stroke of midnight on Monday – visitors from Hubei province and visitors that had been to Hubei province within the previous 14 days, would be denied permission to enter Macau unless they presented a valid certificate confirming they were free of infection from the newly-identified coronavirus.

In addition, the Macau government also issued an executive order banning from Macau casino premises anyone who had been to Hubei province within 14 days of their arrival in Macau.The measure came into effect also on Monday.

The “Wuhan coronavirus impact on Macau” was “worse than expected as visitation collapses,” said a Monday note from brokerage Sanford C. Bernstein Ltd.

“We now have data and anecdotal evidence and the Chinese New Year holiday period is shaking up to be the weakest Macau has seen in years,” they added.

A Monday note from Harry Curtis of Nomura’s Instinet LLC said the mood of Macau operators the brokerage had spoken to was “far more negative” by Sunday than it had been on Friday.

“Cancellations soared across all of the properties we contacted,” said Nomura.

The institution added:”Pessimism rose on how long it could take for business to recover (which, history tells us, it will). Some operators commented that it could take upward of a month to resolve, as the virus is not close to being contained.”

The tally of arrivals from mainland China in the first three days this year was 91,549, a decline of 66.3 percent compared to the holidays in 2019, when the festival fell in early February.

“It is important to remember that during the last three years, the Chinese New Year period (we look at 17 total days surrounding the seven-day holiday period) contributed approximately 5.5 percent of annual gross gaming revenue,” for the Macau market, stated Sanford Bernstein; while it noted the January and February period combined, normally “contributed 16 percent to 17 percent of annual GGR”.

“Day three visitation came in at only 45,000, which was even lower than a normal weekday (Macau had average daily visits of 108,000 in 2019),” wrote JP Morgan Securities (Asia Pacific) Ltd analysts DS Kim, Derek Choi and Jeremy An in a Monday memo.

The Sunday tally was “particularly disappointing as demand/traffic was supposed to accelerate from day three [of the holiday period], as per historical seasonality,” they noted.

China’s State Council has designated the holiday period as running from Friday, January 24 – the eve of Chinese New Year – until Thursday, January 30 inclusive.

But the institution added it was currently “impossible” to gauge how the period would turn out, other than to acknowledge “meaningful downside risks to GGR forecasts for January”.

Nomura had noted in a Friday memo - citing Thursday comments by Macau’s Chief Executive, Ho Iat Seng – that the local government was “reserving the right to close casinos if the virus spreads more quickly”.

Authorities at local and national level on the mainland have also taken a number of steps to contain the outbreak of the virus, which can cause pneumonia.

As of Monday, China’s National Health Commission had said there were 2,862 confirmed cases, within the country, and that death toll stood at 81.

Wuhan has barred travel out of the city, and several other cities in Hubei province have made similar moves, according to mainland news media.

China Daily, a state media outlet, reported on Saturday – citing the China Association of Travel Services – that travel agencies and online travel service providers across the country had been told to suspend with effect from that day, group tours and travel packages that include flight tickets and hotels.

Xinhua, a state news agency, reported on Sunday that China had banned “effective immediately” the sale of wildlife species in the country, and that such a ban would “not be lifted until the epidemic is declared over”. It has been widely reported that scientists fear the novel coronavirus might have jumped from wild animals to humans because of the use of the former for human consumption.

“From what we are seeing in China with respect to the [central] government’s transparency and handling of the situation… the government is taking strong measures to stem the outbreak,” noted Sanford Bernstein.

“A pessimistic read would be that the government is in panic mode and the contagion is getting dramatically worse (which would be a more frightening scenario),” added Mr Umansky and his colleagues.

“As of now there are mixed views on both how virulent and lethal this virus outbreak may be. However, a conservative look at the situation leads one to conclude that it will likely be worse than Sars,” said the Sanford Bernstein team, referring to the severe acute respiratory syndrome outbreak in southern China and worldwide in 2002-2003.

In that outbreak of another form of coronavirus, a total of 8,096 people was infected worldwide, and 774 of those died – a mortality rate of 9.6 percent – according to information on the World Health Organization website.