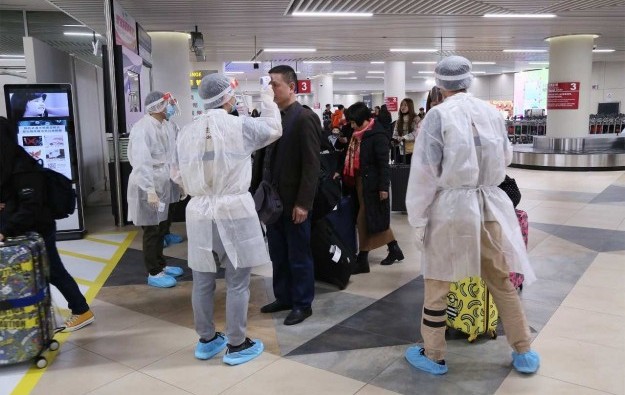 The Macau authorities confirmed on Wednesday the city’s first imported case of viral pneumonia linked to a newly-identified coronavirus reported in mainland China.

A 52-year-old woman from Wuhan in China’s Hubei province had sought medical help on Tuesday evening at the Conde S. Januário Hospital, a Macau public facility. She had subsequently been diagnosed with Wuhan-type pneumonia and placed in medical isolation in Macau. The woman had come to the gambling hub on Sunday (January 19) via the city’s Border Gate that links to the neighbouring mainland city of Zhuhai in Guangdong province.

Later on Wednesday, Macau’s Public Security Police indicated the woman had on Sunday travelled from the Border Gate via a shuttle bus serving the StarWorld Hotel – a casino resort promoted by Galaxy Entertainment Group Ltd – to downtown Macau. On arrival there, she had walked across the road to the New Orient Landmark casino hotel.

A Wednesday morning media briefing by a Macau government cross-departmental team, heard she had stayed at the latter hotel until Tuesday. A Wednesday afternoon update from the authorities said the woman had eaten meals at restaurants in Beijing Street near the New Orient Landmark at circa 5pm on Monday and circa 9.45am on Tuesday. The names of the eateries were not disclosed.

Based on the health authorities’ preliminary checks, the woman showed no signs of being a so-called “super spreader”, the local Health Bureau’s director, Lei Chin Ion, had said at the Wednesday morning briefing. But the authorities were closely tracking the health condition of all the people she was known to have had contact with during her stay in Macau.

“At this point” the authorities “cannot say” whether Macau will “reach a point of a community outbreak” regarding this form of viral pneumonia, said health boss Mr Lei.

He added: “It depends on the medical report on… two friends” of the Wuhan patient, said also to be tourists.

They were being kept under observation in hospital in the city “for 14 days” to see whether they had contracted the virus, said Mr Lei in the Wednesday morning update. The incubation period for the viral pneumonia linked to the coronavirus could last that long, the Health Bureau director explained.

In a follow-up notice issued via text message on Wednesday afternoon, the Macau government indicated a third person – described as a “friend” of the Wuhan woman now confirmed with the sickness – and said to have been in close contact with her, had also been placed under medical observation for 14 days. Two of those under observation were women, and the other person undergoing checks was a man, said the Macau government.

The local authorities were still clarifying precisely which staff at the New Orient Landmark casino hotel – a so-called satellite property using the gaming licence of SJM Holdings Ltd – had been in contact with the confirmed patient. At the morning briefing there had been mention of the woman gambling at the casino in the property.

At the same press conference, Paulo Martins Chan, director of Macau’s casino regulator the Gaming Inspection and Coordination Bureau, said an instruction had been issued that it would be compulsory for all casino staff to wear masks. He said the move was in accordance with the local law on infectious disease control.

The move was so that “the health of local casino workers and guests is prioritised,” said Mr Chan. He also stated that the authorities would visit the New Orient Landmark Hotel on Wednesday afternoon, and health check services would be made available to staff working at the casino hotel.

At a press conference in Beijing on Wednesday morning, China’s National Health Commission said the death toll within the country from the viral pneumonia linked to the Wuhan outbreak stood at nine as of that moment. A total of 440 people – as of the early hours of Wednesday morning – was known to have been infected in China, added the commission.

In a Tuesday note issued prior to the news of the confirmed sickness case in Macau, Nomura’s Instinet LLC drew parallels between what happened in the Hong Kong and Macau economies during respectively the late 2002 – into 2003 – outbreak in mainland China, Hong Kong – and eventually internationally – of coronavirus sickness known as Severe Acute Respiratory Syndrome (Sars); and the avian flu cases in southern China in 2008.

Referring to cases of sickness related to the Wuhan outbreak, Nomura stated: “How the U.S.-listed Macau gaming stocks perform from here, will, in our view, be tied to containment efforts.”

Analysts Harry Curtis, Brian Dobson and Daniel Adam added: “The smaller the number of new cases, the less likely it is that investors will be concerned. The inverse also holds true.”

“The impact of pandemics on stocks tends to be at its worst before the WHO [World Health Organization] issues travel warnings. These are interesting historic[al] perspectives, but the path and intensity of the virus in the near term is unknowable,” the Nomura team stated.

The interdepartmental panel that attended the Macau government’s Wednesday morning media briefing stated the city was not planning any restrictions in relation to the inbound-visitor market. But the authorities were asking visitors to fill in and submit a health declaration form on arriving Macau, as well as to undergo body-temperature screening at the city’s border checkpoints.

Cases linked to the Wuhan outbreak have now been reported in South Korea, Japan, Thailand and the United States.

In a Wednesday memo issued after the news of the confirmed case in Macau, JP Morgan Securities (Asia Pacific) Ltd said it had not yet heard of any “major cancellations” for Macau’s casino hotels or junkets during the upcoming Chinese New Year holiday. However, sentiment in the near-term among investors in Macau gaming stocks “could stay weak” in light of likely further media coverage of the Wuhan-linked viral pneumonia outbreak.

The JP Morgan team also wrote it did not think the impact of the viral pneumonia cases “comparable” to the 2002-2003 Sars outbreak. It stated: “…back in 2003, [Macau] demand came primarily from Guangdong/Hong Kong, as it was before the first [Las] Vegas-type casinos …opened.”

The first Western-style resort in the city – Sands Macao, a property on Macau peninsula and promoted by Sands China Ltd, opened in 2004, JP Morgan’s analysts DS Kim, Derek Choi and Jeremy An reminded their clients.

Only two of Macau’s 18 satellite casinos – the Rio Casino and the President Casino – have closed amid changes to the city’s regulatory system for such properties, and against... END_OF_DOCUMENT_TOKEN_TO_BE_REPLACED