Macau consortium could be preferred for new licence: panel 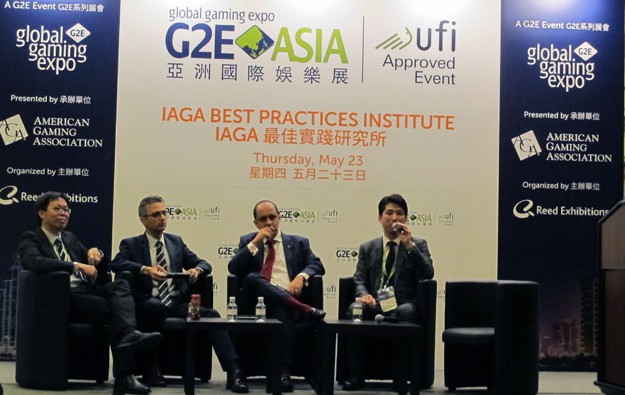 A consortium of Macau-based companies could be favoured by local authorities at the time of a tender for fresh gaming rights, suggested on Thursday a panel of gaming and law experts.

“Probably a seventh concession might go to a joint venture – or a kind of a consortium – between some of the companies already operating in the Macau market,” said lawyer Pedro Cortés (pictured, 2nd right), from local law practice Rato, Ling, Lei and Cortés. He was referring to junket promoters and operators of gaming satellite properties, and to a possible supplement to the six-concession system currently operated in the Macau casino market.

The reference to operators of satellite casinos alluded to the system of so-called service-provider agreements where third-party owners of typically small- or medium-sized hotels have been able to piggyback on the gaming licence of one of the existing concessionaires and offer casino gaming.

The boss of one satellite operator called last year for local entities to be involved in any fresh public tender process for Macau rights.

Alidad Tash (pictured, 2nd left), managing director of gaming consultancy firm 2NT8 Ltd, suggested that were a seventh or eighth licence to materialise, that could eventually help clean up the service provider casino business and shut down some of the more run down properties.

But he added: “The decision regarding a new tender – giving a seventh or eighth licence – has to take into consideration the political perspective, aside from any social concerns … There’s a lot of pressure, and the decision to launch a new licence, it’s not purely a Macau decision, but it will be influenced by Beijing and also external factors.”

They were speaking on Thursday during a conference session at the Global Gaming Expo (G2E) Asia 2019, a casino industry trade exhibition and conference being held at the Venetian Macao casino resort.

An executive of Suncity Group – best known for its involvement in Macau’s casino junket sector – said earlier this week that the company was interested in bidding for a casino gaming concession in Macau. The Suncity brand had been previously linked by industry commentators with a possible play for a Macau casino licence in its own right after the current six expire in 2022.

“Suncity is clearly in the pole position for bidding for a new licence,” said Mr Cortés in his Thursday remarks, adding that the company could eventually collaborate with other entities.

Earlier this month, Macau’s Secretary for Economy and Finance, Lionel Leong Vai Tac, said the local government was currently doing preparatory work that would enable a fresh public tender process for gaming rights in the city. The official hinted at the time that a tender for fresh gaming rights would in likelihood have conditions attached, such as that applicants must pledge to increase non-gaming elements in the gaming market.

Mr Cortés said he expected the current concessions to be extended beyond 2022, as the government would need more time to prepare properly a public tender for fresh gaming rights. “The 2022 deadline that the government has mentioned for the public tender might be to apply some pressure on the operators, in order for them to deliver more in some particular areas,” noted the lawyer.

Mr Alidad said during the panel discussion that Macau also had limitations in terms of land to be allocated to any additional operators, aside from lots 7 and 8 in Cotai, across the street from the Studio City casino resort.

But even before a public tender takes place, there could be some kind of consolidation in the market, suggested Mr Cortés.

“We might have a takeover or partial takeover of some of the U.S. gaming operators in Macau – even before 2022 – by a [Chinese] company already with a presence in the market,” said the law expert.

“We could see that happen directly with one of the Macau-based companies, and that could eventually be welcomed by the local government,” added Mr Cortés.

The Pragmatic Play brand, a leading content provider to the iGaming industry, says it has signed a deal to launch its complete slot portfolio on the bet365 online wagering platform. As a result,... END_OF_DOCUMENT_TOKEN_TO_BE_REPLACED