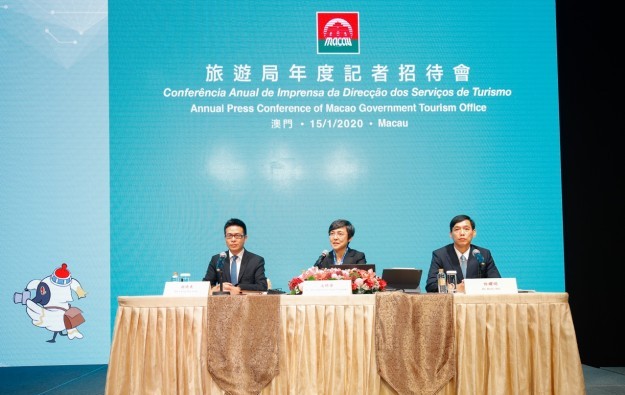 Macau could see the first year-on-year decline in the visitor arrival tally in “years” during 2020; partly due to instability in what was termed the external economic environment, said the city’s top tourism official on Wednesday. The local tourism authority also forecasts a year-on-year decline in visitors travelling to Macau during the upcoming Chinese New Year holiday period.

Ms Senna Fernandes said it was in likelihood “the first time in years” that her department was forecasting a year-on-year “negative” for a full 12 months. MGTO holds a briefing annually at this time, to report its past year’s work and plans for the current calendar year.

The last time Macau saw a decline in the annual number of tourists was in 2015, when aggregate visitor arrivals contracted by nearly 2.6 percent year-on-year, according to official data.

“From what we saw, the external economic environment is not that stable. And what will evolve from the China-U.S. trade war remains to be seen,” the MGTO head remarked to the media. She also noted that her office saw “no sign of recovery” in the short term regarding the number of mainland Chinese visitors that come to the city via neighbouring Hong Kong, by means of Hong Kong-Macau joint tour groups.

Such trade has been hit by the months-long protests in Hong Kong, noted a recent report on the Macau gaming market’s prospects in 2020 from brokerage Jefferies Group LLC.

Last year, the Hong Kong protests had also affected international visitor demand  in that city, and the prospects of onward travel to Macau by that consumer segment, Ms Senna Fernandes remarked.

While the city’s Statistics and Census Service is yet to release Macau’s December visitor arrivals, the MGTO boss noted that the 12th month of 2019 would – just as November – register a year-on-year “double-digit” decline. It marked a reversal from the “robust growth” seen in the visitor tally for the first 10 months of 2019, which had partly been helped by visitor traffic via the Hong Kong-Zhuhai-Macau Bridge, Ms Senna Fernandes highlighted.

The sea-crossing structure handled “over 14 million” passenger journeys and 1.5 million vehicles – since it started operating on October 24, 2018 – up to October 23, 2019, Chinese state-run news agency Xinhua has reported. Most trips were between Macau and Hong Kong.

This holiday season, some mainland Chinese and Hong Kong consumers seemed to opting for long-haul travel, which could contribute to Macau seeing a “6 percent” year-on-year decline in the seasonal visitor tally, which would translate to 1.13 million arrivals, Ms Senna Fernandes said.

The MGTO boss said this year her department would try to help the local tourism sector expand the segment of overnight visitors. For full-year 2019, Macau received 18.6 million overnighters, a tally up only 0.8 percent year-on-year. But the same-day visitors for 2019 surged by 20 percent to over 20.7 million, according to MGTO.

“A number of new hotels will be launched this year, with thousands of new guest rooms to go on line gradually in the years to come,” said Ms Senna Fernandes.

By the end of December, Macau had 41,148 guest rooms in operation. The average room rate of the city’s three- to five-star hotels stood at US$170.10, according to MGTO’s information. Most of Macau’s modern casino resorts offer either five-star or four-star hotel accommodation.

“We will work on our overseas market and seek collaboration with the Guangdong-Hong Kong-Macau Greater Bay Area in order to attract more overnight guests,” Ms Senna Fernandes said.

“Our primary focus will be on those source markets where Macau has direct flight links..;  for the mainland Chinese market, we will work on those that are connected by high-speed railway,” especially those… “outside Guangdong province,” because people from those places were more likely to stay overnight, the official added.