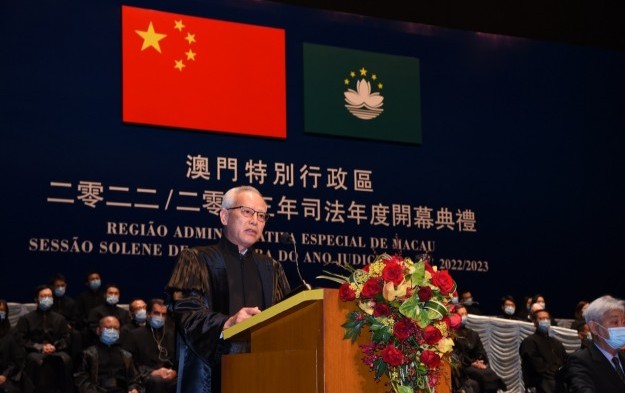 Macau’s Court of Final Appeal will “in due course” issue a ruling on whether the city’s six casino concessionaires should be labelled as “companies operating on an exclusive basis,” said on Wednesday the court’s president, Sam Hou Fai (pictured).

If the court rules that gaming concessionaires are indeed operating on an exclusive basis, the “more than 50,000 workers” currently employed by these companies should be treated for the purposes of any criminal proceedings in the same way as civil servants, he added.

Such a ruling would determine if Macau casino workers were subject to the types of penalty outlined in Macau’s Criminal Code that were applicable to civil servants, said Mr Sam. His comments were in a speech at a ceremony to mark the start of the 2022/2023 judicial year.

Article 336 of the city’s Criminal Code states that “members of managing, oversight and other boards and the workers” of concessionaires of public services or goods, or companies operating on an exclusive basis shall be comparable, for criminal purposes, to civil servants. The same concept applies to workers in public companies, companies with public capital, or with a majority shareholding of public capital.

There had previously been different interpretations from the city’s courts on the matter of comparability of casino staff to civil servants, based on the interpretation on whether gaming concessionaires operated on an exclusive basis . As such, the Court of Final Appeal’s ruling on that matter would create a biding precedent, according to judge Sam.