Macau cracks down as 1Q gambling-related crimes up 14pct 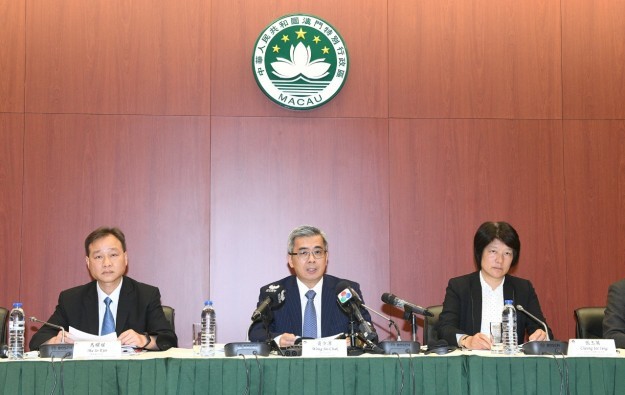 Macau’s police forces have cracked down on casino-related loan-sharking and unlawful detentions in the first quarter of 2019, taking down several organised crime groups during the period, said Secretary for Security Wong Sio Chak (pictured, centre) in a Thursday press briefing.

According to figures published on Thursday by the police, loan-sharking and kidnappings fuelled a 14.1 percent year-on-year increase in the number of gambling-related crimes, to an aggregate of 438 suspected cases in the three months to March 31.

Cases of suspected unlawful detention linked to usury – unlawful lending of money, a practice more commonly known as loan-sharking – increased by 37.3 percent year-on-year to 81 cased in the opening three months of 2019, showed the data from the Secretary of Security’s office.

The authorities recorded an aggregate of 128 of gambling-related cases of suspected usury in the reporting period, up 25.5 percent from the prior-year period.

Mr Wong told reporters the increase was due to police forces focusing on these crimes, leading to the February arrest of 71 people suspected of being part of an organised crime group dedicated to loan-sharking and kidnapping.

The Macao Judiciary Police has set up a centre, operating round-the-clock, to coordinate the criminal investigators and the four inspection teams dispatched to the city’s casinos, added the official.

The police will beef up the monitoring of activities in and around the city’s casinos and will strengthen communication with Macau’s gaming companies and hotels, Mr Wong said.

The official said gambling-related unlawful detention and usury crimes have so far posed no “significant threat to the security of Macau society,” while stressing that an overwhelming majority of both suspects and victims are from out of town.

It is likely that Macau will shortly have a third round of citywide centre-based Covid-19 testing in little more than a week, after the results so far of a second mass test – that was due to finish... END_OF_DOCUMENT_TOKEN_TO_BE_REPLACED