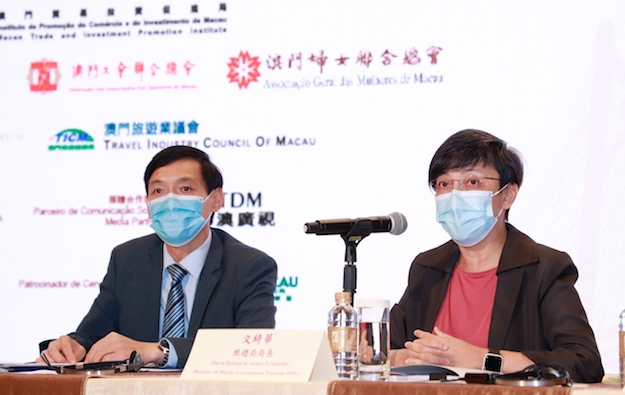 Macau’s visitor tally currently stands at around 20,000 a day and is likely to remain stable for “some time” after the conclusion of a number of festivities in October, said on Wednesday Maria Helena de Senna Fernandes (pictured, right), director of the Macao Government Tourism Office (MGTO).

Ms Senna Fernandes also said that the average hotel occupancy stood at around 40 percent, with visitors to the city now accounting for the majority of hotel guests. The MGTO director was speaking at a press conference about the 8th Macao International Travel (Industry) Expo, taking place in November.

The September tally of visitor arrivals in Macau rose by 97.7 percent month-on-month, to 449,085, showed official data. The city’s Statistics and Census Service attributed the increase to the resumption in late September of Individual Visit Scheme (IVS) visas for mainland China residents to travel to Macau.

In her Wednesday remarks, Ms Senna Fernandes said MGTO would continue to communicate with China’s Ministry of Culture and Tourism regarding the possibility of allowing package group tours to visit Macau.

China’s Ministry of Culture and Tourism stated last week that businesses normally involved in, respectively, “inbound and outbound” package tours involving the mainland market; and bundled sale of “flights and hotels”, were “not to resume” such commerce for now, due to concerns that Covid-19 might make a comeback in China during cooler months.

The tourism official also said that the Macau government would continue focusing on online promotions targeting the mainland market, in a bid to attract more Chinese tourists to the city.

The Macau government launched in September a spending-stimulus scheme for mainland China tourists coming to the city, with the aim of getting such visitors to extend their stay. The government’s scheme was being run with assistance from Chinese online commerce brands Tencent, and Alibaba; as well as the city’s flag-carrier airline, Air Macau Co Ltd.

Brokerage Sanford C. Bernstein Ltd said in a Tuesday note that it expected the number of visitor arrivals to Macau “to continue to increase over the next few weeks and months, with a pickup in gaming visitors.” The institution said its channel checks indicated that Macau’s gross gaming revenue in the first 26 days of October was approximately MOP5.95 billion (US$745.3 million), down 73 percent from the prior-year period, but up 211 percent from the previous month.

Philippine gaming investor Leisure and Resorts World Corp reported a net loss of nearly PHP222.4 million (US$4.2 million) in the first three months of 2022, up from PHP125.6 million a year earlier.... END_OF_DOCUMENT_TOKEN_TO_BE_REPLACED