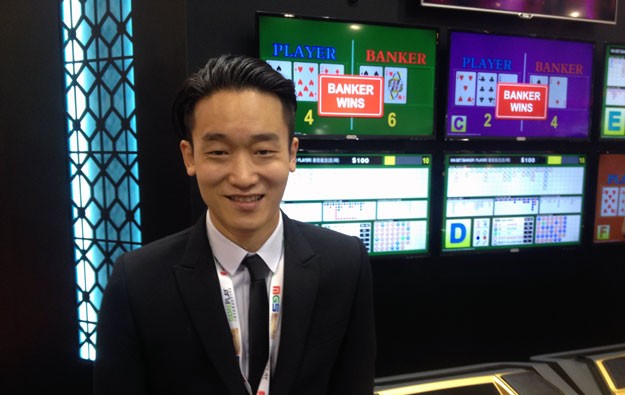 Taiwan-based Jumbo Technology Co Ltd sees a silver lining to the downturn of the Macau gaming industry as the expected shift to more mass market gambling could help the company push its products into the market, namely its single terminal electronic gaming product Long Dragon Baccarat.

The firm displayed at Macao Gaming Show 2015 – ending today at Venetian Macao – the second generation of its Long Dragon Baccarat, which has already gained regulatory approval from Macau’s gaming regulator, the Gaming Inspection and Coordination Bureau.

Long Dragon Baccarat enables casino operators to link up to eight sets of gaming action simultaneously to a single terminal.

“Long Dragon Baccarat is our main product in Macau and the whole point is we’ve come up with this concept that a lot of baccarat players like to follow patterns, or which they call the long dragon,” said Derek Lin (pictured), Jumbo Technology’s sales manager. He was referring to the patterns of results in baccarat in terms of a run of ‘banker’ winning hands or a run of ‘player’ winning hands.

“Our machines will always notify you when that long dragon appears,” he added.

The first generation of the Long Dragon Baccarat can also be found in Mocha slot clubs around Macau, which are run under the licence of Melco Crown Entertainment Ltd.

Jumbo Technology is currently working on a new version of the Long Dragon Baccarat product, which could be launched next year, said Mr Lin, adding that the company would like to expand its business in Macau despite the downturn in the gaming industry.

Casino gross gaming revenue fell in October for the 17th straight month, standing at MOP196.1 billion (US$24.6 billion) in the first 10 months of this year, down 35.5 percent from the prior-year period.

“The Macau market is going down and nobody knows what is going to happen next. For us… it will be back up one day. Now it’s probably the best time for us to … get even more involved in Macau. We don’t have that many machines in Macau yet,” said Mr Lin.

“The most special part [about the slot] is that we have enhanced the bonus feature when you hit the jackpot,” said Mr Lin. “On top of the number you see at the jackpot, there is also a percentage that will add up to it. Because of the amount you are betting, for example, it [the percentage] may increase to 200 percent.”

Mr Lin said it is strategically important to release new products and technology in the Macau market as the company eyes other business opportunities in the Southeast Asian market.

“In Southeast Asia, our part is more like collaboration rather than selling machines – we are helping people to build up casinos – but in Macau we want to sell more machines to show the world [our capabilities],” the sales manager said.

“Our company has very decent experience in [gaming] operations,” said Mr Lin, adding that Jumbo Technology can support the operations of gaming companies in the Southeast Asia market.

The firm has been working with state-run casino operator-cum-regulator Philippine Amusement and Gaming Corp (Pagcor) on a central management system to monitor the casinos managed by Pagcor, added Mr Lin.

Some Macau casinos visited by GGRAsia on Thursday, actually had tables that were closed, notwithstanding strong consumer demand during Chinese New Year (CNY). The reasons for some tables being... END_OF_DOCUMENT_TOKEN_TO_BE_REPLACED