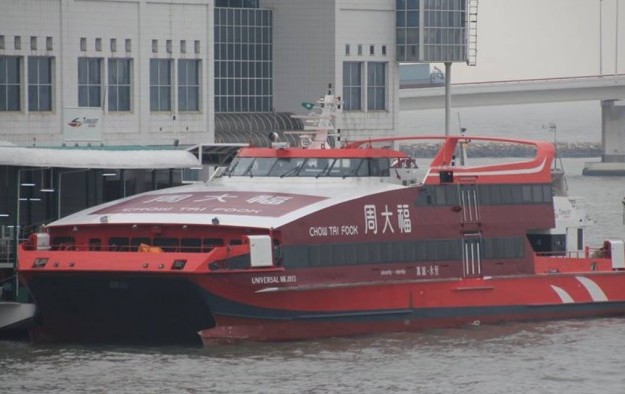 Ferry services between Macau and Hong Kong were disrupted late on Wednesday after a high speed Pearl River Delta shuttle operated by TurboJET collided with a mainland-registered vessel near the island of Cheung Chau.

According to Agence France-Presse, 38 people were injured in the incident. There were 160 people reported to be on board the ferry, Universal MK 2013 (pictured in a file photo) operated by the Shun Tak-China Travel Ship Management company. The firm is a unit of Shun Tak Holdings Ltd, managed by Pansy Ho Chiu King. Ms Ho, who gave the keynote address at this year’s Global Gaming Expo (G2E) Asia 2014, which concludes today, is also a minority investor in Macau casino concessionaire MGM China Holdings Ltd.

“A Macau ferry collided with a vessel from the mainland. Thirty-eight passengers on the Macau ferry were slightly injured and sent to Cheung Chau hospital,” a Hong Kong government spokesperson told AFP.

It is the second major crash in six months involving a TurboJET vessel. In late November last year, at least 85 people were injured when one of the company’s ferries hit an “unidentified object” in waters near one of Hong Kong’s outlying islands – some of the most congested waterways in the world.

In December 2012, 26 people – including four Macau residents – were hurt when another TurboJET ferry – the Urzela – bound for Hong Kong, crashed into a marker buoy in sea-lanes off Macau Outer Harbour Ferry Terminal. It led a Macau a legislator to call for mandatory seat belt wearing on maritime passenger services operating from the territory.