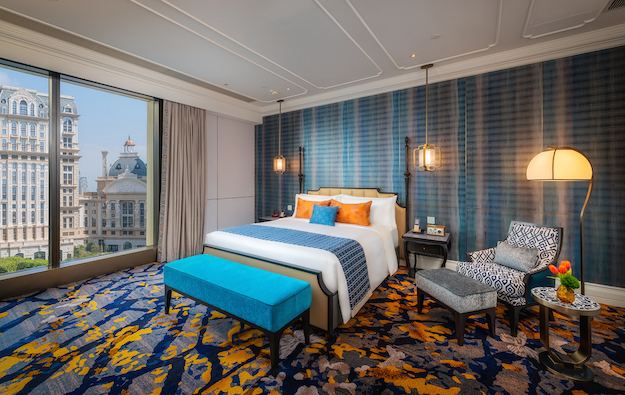 Macau five-star hotels had an average occupancy rate of 44.1 percent in November, up 2.4-percentage points year-on-year, while registered hotel accommodation of all categories averaged 46.8 percent, up 2.8-percentage points from the prior year, according to data released on Wednesday by the city’s Statistics and Census Service.

The November occupancy was compiled from data on the city’s 35,300 available hotel and guest house rooms. The data set excludes hotel rooms designated for quarantine purpose during the period, the census service noted.

The market-average length of stay for guests in November this year, stood at 1.8 nights, up from 1.6 nights in the same month last year.

For the first eleven months of this year, Macau’s average hotel occupancy rate stood at nearly 50 percent, with five-star hotels at 47.2 percent over that period.

From January to November, the average stay of guests from mainland China was 1.8 nights. The average for guests registered as living in Macau, was 1.7 nights.

Following the onset of the Covid-19 pandemic last year until now, mainland China has been the only place that has a largely quarantine-free travel arrangement with Macau. During the pandemic period, the Macau government has sought to stimulate demand for the city’s hotel services by encouraging so-called ‘staycations’ by locals.

A separate survey issued recently on the Macau hotel sector indicated Macau’s average hotel room rate across three-star, four-star and five-star properties, stood at MOP829.00 (US$103.20) for the January to November period. That was 9.9 percent down on the same period last year.

The latter survey is compiled by the Macau Hotel Association, which has 40 member-hotels that are mostly within casino hotel complexes in the city.

The average room rate of Macau’s five-star hotels for the first eleven months of this year was MOP1,010.20, representing a 25.3-percent year-on-year decline, according to the association’s survey.

Most of Macau’s casino operators are likely to generate positive free cash flow in the first quarter, given the robust recovery level of mass-market gross gaming revenue (GGR) in January, relative... END_OF_DOCUMENT_TOKEN_TO_BE_REPLACED