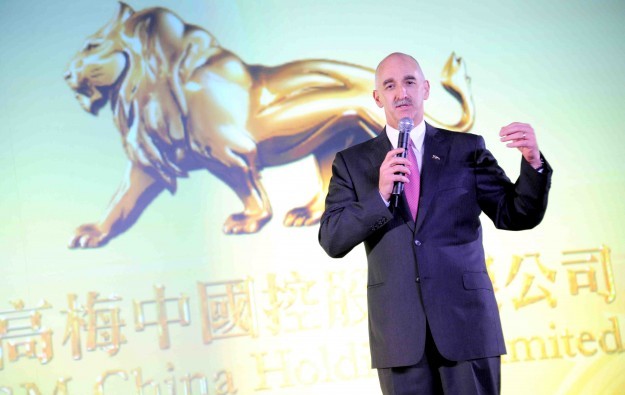 “We are very pleased to see the business stabilising [and] starting to see some growth,” Mr Bowie (pictured) told reporters on Monday.

He added: “It would still appear that new capacity exceeds the growth that we have experienced in the market but I think that we have turned a corner… and that we can look to more positive outcomes.”

“Customers are coming back to Macau,” Mr Bowie said.

The MGM China CEO declined to provide a forecast for overall industry performance in calendar year 2017. Over the weekend, the respective bosses of Macau casino operators SJM Holdings Ltd and Melco Crown Entertainment Ltd said they expected the city’s gaming sector to see positive growth in casino GGR in full 2017.

“We have announced the second half of the year and we continue to be very positive about that,” Mr Bowie said.

He said the delays in getting the property completed were related with the “complexity” of its architecture and of some of the systems to be installed at the site.

Asked by reporters about the business strategy for MGM Cotai, Mr Bowie stated: “We obviously work a portfolio: we have both VIP [and mass]. But our particular focus is on mass and that particularly is our focus for Cotai.”

Mr Bowie also commented on a counter-proposal put by the Macau authorities to the industry’s own proposal for smoking lounge enhanced technical standards.

The industry’s original proposal was a trade-off for being allowed to keep such facilities. The industry initiative was submitted to the government in December, but only revealed to the public last month.

Macau’s Secretary for Social Affairs and Culture, Alexis Tam Chon Weng, noted to Macau media on February 20 that one of the government’s counter-proposals was that the so-called “negative pressure” mechanism for such smoking lounges – to ensure tobacco smoke from the lounges is efficiently sucked up by the ventilation systems and doesn’t escape onto a casino floor via the lounge doors – should be set at -5 pascal, with a “pascal” being a scientific unit of pressure. The city’s six casino operators had suggested a technical requirement of -1 pascal.

The government’s counter-proposal also includes a provision for smoking lounges in VIP gambling areas, with VIP tableside smoking to be banned.

“We are all looking to lift our standards, specifically [regarding] the negative pressure in smoking lounges,” Mr Bowie said on Monday. “We are looking to be provided sufficient time to make those changes.”

He argued that the latest government proposal meant smoking would only be permitted in smoking lounges with no gaming elements inside, thus not exposing workers to secondhand smoke.

Mr Bowie added: “I think that if we were to be totally non-smoking, without smoking lounges, [it] would definitely have an impact on our gaming revenues. But the comprise we have reached ensures the safety of our staff, but also gives a choice to our consumers.”

A number of investment analysts have said that in markets where casino smoking has been banned completely, casino revenue subsequently dipped. Macau has so far taken a gradualist approach to the casino smoking issue, potentially making it harder to quantify what effect – if any – partial restrictions on casino smoking have had on local venues’ gaming business.

Macau’s casino gross gaming revenue (GGR) for the first five days of February is estimated at MOP1.9 billion (US$235.1 million) – or MOP380 million per day – a level that suggests a “45... END_OF_DOCUMENT_TOKEN_TO_BE_REPLACED