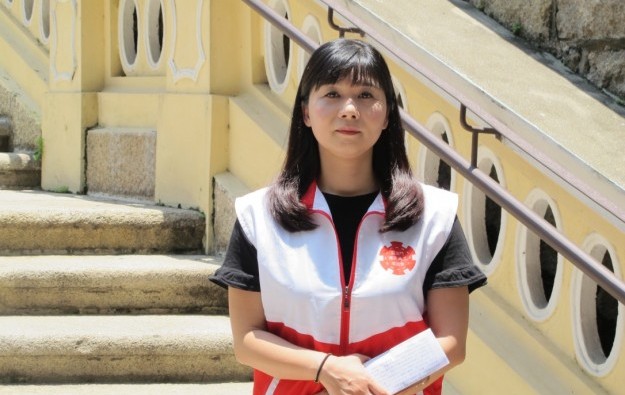 A Macau gaming labour activist group has called on the city’s gaming operators to award their staff  a pay hike of “at least 5 percent”. It said that the salary increases in recent years had not been satisfactory.

So said Cloee Chao (pictured in file photo), head of Macau labour activist group Macau Gaming Staff Rights Association. Her group delivered on Tuesday a petition urging the Macau government to push the city’s casino operators into awarding what she termed a “better salary increase” to casino employees. The group also urged for the introduction of a mandatory allowance for working night shifts, as well as a “five working days” per week policy for staff on shifts.

“During the years of revenue decline in the Macau gaming industry, we were aware of the bad market conditions and did not have any pay hike, bearing the burden together with the companies,” Ms Chao told GGRAsia.

“In recent years… [casino] dealers got at most a 2.5-percent pay hike annually,” Ms Chao added, noting that her group felt that gaming workers have not been adequately rewarded since the Macau gaming market started recovering.

Macau’s accumulated casino gross gaming revenue (GGR) for full-year 2018 rose by 14 percent compared to the tally of 2017, according to official data. It marked the second straight year of GGR growth, following an increase of 19.1 percent in full-year 2017. Before that, the Macau market had experienced three consecutive years of annual decline.

In recent years, Macau operators have been awarding annual salary increases to their staff, with the announcements made at the beginning of the calendar year. Most operators have also been making supplementary payments to staff on a twice-yearly basis in recent times, on an ad hoc basis.

Macau’s average composite consumer price index for the 12 months to September this year rose by 2.86 percent from the previous period, according to the latest data from the city’s Statistics and Census Service.

The average earnings – excluding bonuses – of full-time employees in Macau’s gaming sector in June rose by 3.8 percent year-on-year to MOP24,550 (US$3,045). The average earnings of resident and non-resident gaming employees were respectively MOP24,680 and MOP22,120, according to the second-quarter manpower survey released by the statistics service.

Average earnings of Macau’s dealers rose by 2 percent year-on-year to MOP20,850 by the second quarter, the survey noted.