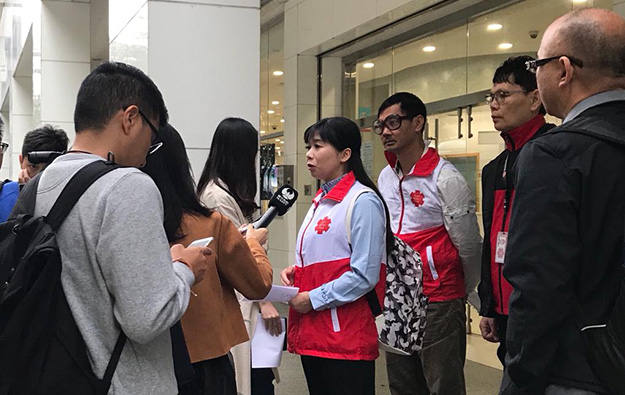 A Macau gaming labour activist group delivered a letter to the city’s Labour Affairs Bureau on Tuesday to “reflect concerns” it had regarding rubella infection cases reported this month among staff from the City of Dreams casino resort on Cotai and the StarWorld Hotel on Macau peninsula.

The group’s letter – addressed to Wong Chi Hong, the bureau’s director – asked the government to press casino managements to provide disinfecting alcohol liquid or handwashing gel for staff in their workplaces and rest areas, and to allow staff to wear protective masks over their nose and mouth while on duty.

Cloee Chao (pictured at the event), head of New Macau Gaming Staff Rights Association, told GGRAsia prior to delivering the letter, that the rubella infection incidents worried not only workers at those venues but also staff at other local casino resorts.

She also expressed concern about workplace culture in the Macau gaming sector that led staff to work through minor illness and might help the disease to spread.

People with rubella virus – a disease also known as German measles – typically show symptoms including a rash, fever and swollen lymph glands, according to the World Health Organization (WHO). Complications linked to the disease include the risk of miscarriage or foetal abnormality for women who contract it in the early stages of a pregnancy. Rubella can be transmitted by airborne droplets when infected people sneeze or cough according to the WHO.

Ms Chao stated to us, referring specifically to workers at the venues with reported cases: “They did not see many reinforced messages or guidance from the properties on how to take some precautionary measures” against rubella infection.

According to information from Ms Chao and others, internal company memos were sent to staff at the two gaming properties with declared infections – venues operated by Melco Resorts and Entertainment Ltd and Galaxy Entertainment Group Ltd respectively – calling on employees to be vigilant regarding symptoms of rubella and to seek immediate medical help in case of concern.

Lam Chong, director of the Disease Prevention and Control Centre at Macau’s Health Bureau, acknowledged in a briefing last week that as many as 25 percent of “Macau residents” might not have immunity to rubella. Two routes to immunity are either previous infection or vaccination. Macau introduced a vaccination programme against rubella in the 1990s, Mr Lam noted.

Within the first 14 days of this month, a total of 11 people – said to be workers either at City of Dreams or at StarWorld Hotel – was confirmed as having rubella, said the Health Bureau. Macau had an aggregate of 18 rubella cases reported citywide in the first 14 days of April, versus only one such case in the whole of the first quarter this year.

The Health Bureau noted in a Sunday press statement that it had “instructed” local employers of all rubella-infected people to “reinforce disinfection” in the workplace and “make proper arrangements” for any pregnant staff with “no immunity” to the rubella virus – i.e., thought to be unvaccinated or without previous exposure to the illness.

Ms Chao said her group’s purpose in lobbying the Labour Affairs Bureau was to speak on behalf of casino resort workers – especially gaming floor staff – that need to be in contact with a large number of people during each work shift. The labour group said a challenge to disease control was that staff might be reluctant to ask for time off even if they had some of the symptoms linked to rubella.

“Gaming staff don’t file for sick leave easily when they suffer from some milder illnesses such as cold, or fever. We are worried some staff might have already contracted a disease like this [rubella] without knowing… and they just came to their workplace as usual. That might cause the virus to spread..,” Ms Chao told GGRAsia.

Casino operator Melco Resorts and Entertainment Ltd announced on Thursday that it would launch at the end of June a new, themed zone for “family-friendly” entertainment at its majority-owned... END_OF_DOCUMENT_TOKEN_TO_BE_REPLACED