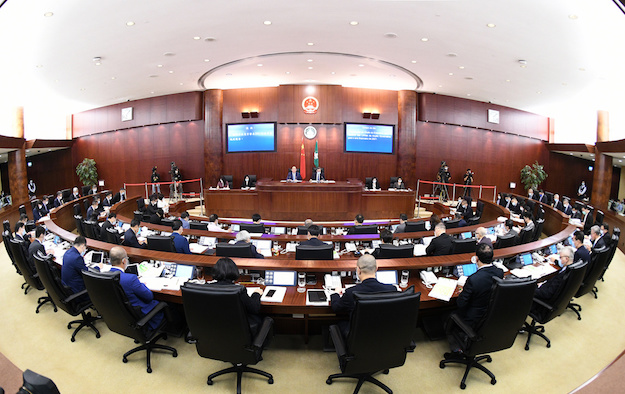 The amendment of Macau’s Gaming Law is to be part of the local government’s agenda for 2021, said on Monday Macau’s Chief Executive, Ho Iat Seng, in the city government’s Policy Address for the next fiscal year.

The address was at a meeting of the Legislative Assembly (pictured). Mr Ho said that for 2021, the Macau government would work to “improve the legal framework for the gaming industry”, and “start the preparatory work for Macau’s gaming concessions”. That was understood to be a reference to a public retender process occasioned by the expiry in June 2022 of the six existing Macau gaming licences.

According to the more detailed policy document released following Mr Ho’s address, the local government plans to start revising the city’s gaming law by the first quarter of next year, and to complete the task by the fourth quarter, prior to submitting a finalised draft bill to the Legislative Assembly. But the timetable could be influenced by a public consultation process the government has pledged to hold, the document noted.

Macau’s Secretary for Economy and Finance, Lei Wai Nong, had in October mentioned to the media that the government planned to have ready by 2021, a bill amending the city’s gaming law. The local authorities say such a step is necessary, ahead of a public retender process.

At a press briefing following the Policy Address speech, Macau’s Chief Executive declined to comment on what he said was the “speculative” issue of whether the city’s government would consider any extension of the city’s current gaming concession terms.

Angela Leong On Kei, a legislator and also an executive director at Macau gaming licensee SJM Holdings Ltd, told public broadcaster TDM Chinese radio that a timetable for the Macau gaming concessions retender timetable – absent in the Policy Address 2021 document -  would still be subject to developments in the Covid-19 pandemic.

But Ms Leong said she believed that the existing local gaming operators would be “prepared” to meet relevant requirements of the Macau government regarding a refreshment process over gaming rights.

The Macau government would continue to “foster responsible gambling”, and to “combat illegal gambling” activities, Mr Ho told the legislators in his address during today’s Legislative Assembly gathering.

The policy document, also said the Macau government would “update and elaborate” the reporting standards on “substantial transactions” of the city’s gaming operators and junket operators, and “strengthen due diligence” on gaming operators’ electronic transfers of “capital”. It was not clear whether that was a reference to money for VIP gambling, or some other form of fund transfer.