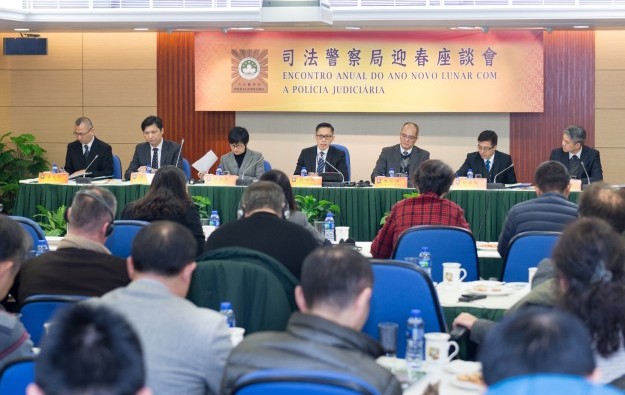 Macau recorded a total of 4,714 cases of suspected gaming-related crime in full-year 2017, according to data disclosed on Tuesday by the city’s Judiciary Police in a press conference (pictured). The figure represented an increase of 2.4 percent compared to the 4,602 such cases in 2016.

Gaming-related cases of suspected usury – unlawful lending of money that is more commonly known as loan-sharking – decreased in 2017 by 2.9 percent year-on-year to 428, the police data showed.

In 2017, a total of 464 cases of gaming-related suspected unlawful detention were recorded, reflecting a decline of 7.8 percent year-on-year. Such cases are typically associated in Macau with loan sharking connected to gambling.

Commenting on the overall increase in cases of suspected gaming-related crime in Macau last year, the Judiciary Police acknowledged there had been a growth in several types of gaming-related crime in recent years. The body said it had readjusted its strategy to curb such crime cases and that it had successfully dismantled several criminal groups last year.

Police and other Macau emergency bodies joined a drill – involving a simulated armed robbery in a public area – last week at the Galaxy Macau casino resort operated by Galaxy Entertainment Group Ltd. The government said the drill had been designed to test the ability of public emergency departments and the local casino industry to coordinate and handle a response to major incidents.

The drill came only days after the theft of casino chips with a face value of nearly HKD47.9 million (US$6.1 million) from the Wynn Macau casino property on the city’s peninsula operated by Wynn Macau Ltd. The Macau authorities decided to conduct the drill following two deadly attacks in 2017 involving gaming properties respectively in the Philippines and in Las Vegas in the United States.

The Judiciary Police said on Tuesday that a total of 2,171 people had been sent to the Public Prosecutions Office for further handling in 2017 for alleged gaming-related crimes, up by 8.4 percent in year-on-year terms.

Macau’s accumulated casino gross gaming revenue (GGR) for full-year 2017 increased by 19.1 percent compared to 2016, according to data released earlier this month by the city’s regulator, the Gaming Inspection and Coordination Bureau. It marked the first year of GGR growth after three consecutive years of annual decline: in 2016, GGR fell 3.3 percent; in 2015, it slipped 34.3 percent; and in 2014, GGR declined by 2.6 percent year-on-year.