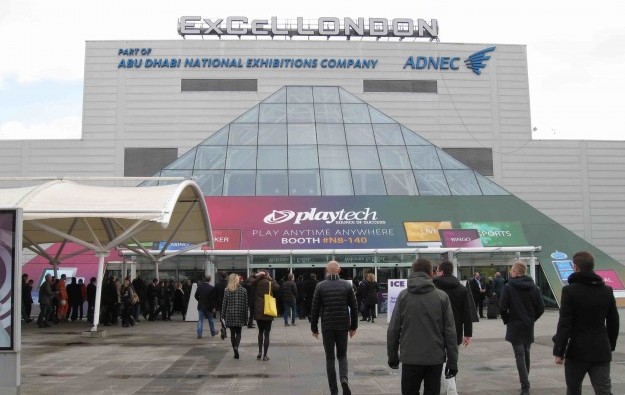 The Macau Gaming Equipment Manufacturers Association (MGEMA) is to launch on Wednesday what it describes as its first-ever international public relations campaign.

The trade body – which organises an annual casino trade event in Macau called the Macao Gaming Show – says it represents 150 gaming- and entertainment-related businesses in the Asia-Pacific region.

It is starting its international campaign with an off-site cocktail reception on the evening of the second day of this year’s International Casino Exhibition (ICE), an industry trade show (pictured in a file photo) held in London in the United Kingdom that is branded ICE Totally Gaming.

“The drive for economic diversity in Macau opens a wealth of opportunity for business in the region and that will form the crux of our international campaign over the coming year,” said the MGEMA’s chairman Jay Chun in a statement prepared earlier.

He added: “The reception will be the MGEMA’s first official venture on foreign soil. As an association we have a lot of initiatives and projects we want to discuss with the industry, and we also want to build partnerships across the world that will strengthen the trading, commercial and cultural links between us all.”

After taking a large share of the Macau electronic table games market with its Live Multi Game terminals – a product that uses a live dealer but electronic betting and electronic bet settlement – the LT Game brand has gained product approvals from regulators in Nevada in the United States, and is exploring European markets.

The MGEMA statement said the cocktail party would include “major figures from the Chinese and Asian industries,” and would provide an opportunity for the international business community to “discuss economic and investment opportunities in the region with the Macau delegates”.

ICE 2016 – which opened on Tuesday and runs until Thursday at ExCeL in east London – will additionally feature on Wednesday “Women in Gaming: State of the Industry”, a panel hosted by Global Gaming Women. The grouping aims to support the development and success of women in the international gaming industry through “education, mentorship, and networking opportunities”.

Wednesday also sees a briefing at ICE 2016 on the state of the gaming market in India. An afternoon panel on the legal status of gaming in India is scheduled to include K.T.S. Tulsi, a member of that country’s parliament.

Topics will include whether the state of Maharashtra will be able to implement four-decade old legislation legalising gambling and betting, and whether fellow Indian state Sikkim might be able to lead the country in the development of licensed online gaming and betting.

According to the organisation, a total of 510 exhibiting organisations from 62 nations will be attending this year’s show, including 119 companies making their first ever appearance.

Most of Macau’s casino operators are likely to generate positive free cash flow in the first quarter, given the robust recovery level of mass-market gross gaming revenue (GGR) in January, relative... END_OF_DOCUMENT_TOKEN_TO_BE_REPLACED