Macau GGR decline to be worse in October: govt 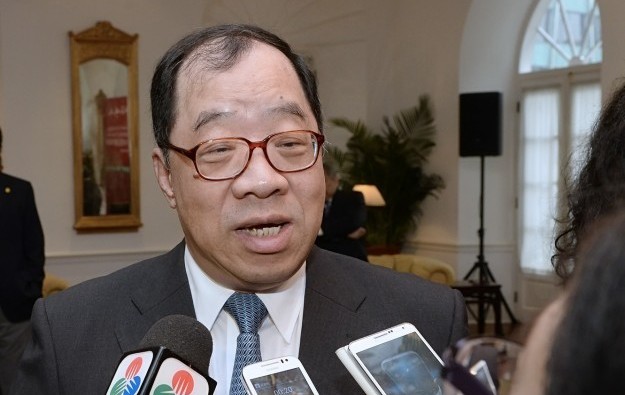 Macau’s Secretary for Economy and Finance Francis Tam Pak Yuen (pictured) on Thursday said that the city’s gross gaming revenue (GGR) from  its casinos is expected to drop further in October – judged year-on-year – than the decline seen in September.

GGR in September shrank 11.7 percent year-on-year to MOP25.6 billion (US$3.2 billion), according to official data.

Mr Tam pointed out that there is still more than a week to go before the end of October, but said the government is expecting a bigger year-on-year drop for October’s GGR based on the accumulated revenue for the month to date.

The Macau official was speaking to reporters on the sidelines of the opening ceremony of the 19th Macao International Trade and Investment Fair.

A note from Credit Suisse AG this week said GGR up to October 19 stood at MOP18.7 billion, implying average daily revenue (ADR) of MOP984 million. Gaming analysts are expecting an over 20-percent drop year-on-year in October.

Casino revenue in October 2013 reached MOP36.5 billion, the best month ever for the city’s industry.

That would mean October would be the fifth month in a row that GGR has declined judged against year prior periods; the most sustained retreat since 2009. Japanese finance house Nomura on Thursday said the city’s casino GGR would probably drop 2 percent for full-year 2014.

In September, Mr Tam said he did not forecast GGR growth for the full year to be negative. He estimated gaming revenue to stay at a similar level to that recorded in 2013 – MOP360.7 billion.

On Thursday, the Macau official said a recovery should come in the second half of 2015, following the opening of new casino resorts. The second phase of Galaxy Macau, the Cotai casino resort of Galaxy Entertainment Group Ltd, and Melco Crown Entertainment Ltd’s Studio City, also in Cotai, are due to open next year.

Mr Tam also pointed out that the slowdown in the gaming industry is not impacting other sectors. He highlighted that the city has welcomed more tourists in the first nine months of 2014 than a year before, which is driving up revenue at local hotels, restaurants and shops.

In the first three quarters of 2014, visitor arrivals increased 7 percent year-on-year to 23.5 million, according to government data published on Thursday.

The shift in revenue weighting from gaming to non-gaming has also been seen in the numbers that Sands China Ltd reported for the third quarter of 2014.

The casino operator reported annual increases in net revenue for all non-gaming businesses – rooms, mall operations, food and beverage, convention, ferry, retail and others – during the quarter, which contrasted with a drop of 1.9 percent in year-on-year terms for casino revenue.

More than 500 people are still inside the Grand Lisboa casino hotel after the complex was locked down on Tuesday by the local authorities, said an official during a Wednesday afternoon briefing on... END_OF_DOCUMENT_TOKEN_TO_BE_REPLACED