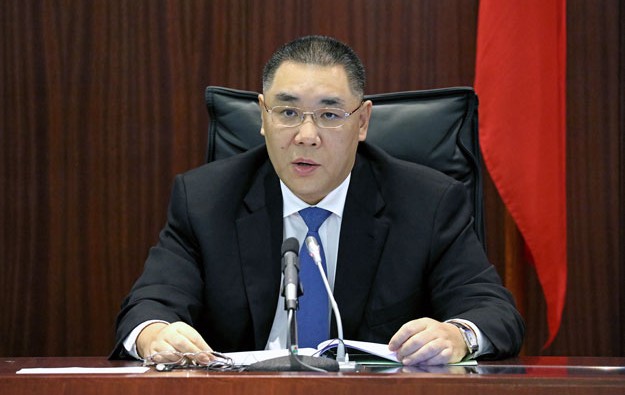 Macau’s Chief Executive, Fernando Chui Sai On (pictured), forecasts the city’s casino gross gaming revenue (GGR) to come in at MOP200 billion (US$25 billion) in 2016, a further decline from the aggregate annual tally expected for this year.

“In regard to annual gaming revenue, our economic forecast for 2016 is MOP200 billion, an average of MOP16.6 billion per month,” Mr Chui said in a press conference on Tuesday, after announcing his annual policy address at the Legislative Assembly.

He added: “The gaming sector has grown rapidly over the last 10 years and is now going through a profound adjustment phase, which we consider normal. Our forecast [for 2016] is conservative and aims to maintain stability.”

Macau casino operators raked in MOP351.5 billion in gaming revenue in 2014, the first annual decline on record since the liberalisation of the industry in 2002. GGR fell in October for the 17th straight month, standing at MOP196.1 billion in the first 10 months of this year, down 35.5 percent from the prior-year period.

On Tuesday, Mr Chui urged Macau’s casino operators to continue increasing their non-gaming offerings. “We can see that other sectors – like hospitality and retail – have clearly grown. So we expect other non-gaming sectors to keep growing,” said the Chief Executive.

“We believe that the [Macau] government may want to err on the conservative side to prepare their 2016 budget after the weak 2015 and government spending cut earlier this year,” they added.

The Chief Executive also vowed to promote local employment and improve social welfare – the government will again offer in 2016 annual cash handouts of MOP9,000 and MOP5,400 for permanent and non-permanent residents, respectively. The government is proposing a 2.5 percent salary increase for civil servants in 2016, versus a 6.8 percent increase this year.

“In general, the casino operators benchmark the civil servants’ salary to adjust the employees’ payroll. The moderating pay rise for civil servants is likely to alleviate the cost pressure of casinos as well, in our view,” said Mr Fong and Ms Wong.

Mr Chui said the government would continue to strengthen supervision of the gaming industry, including junket operators and how they manage credit extended to VIP players.

“In the long-term, it is essential to revise [regulations]. We are currently conducting a mid-term review of the gaming industry … that already includes the gaming promoters [junkets],” said Mr Chui. “We expect a healthier development of the industry in the future”.

The Secretary for Economy and Finance, Lionel Leong Vai Tac, said earlier this month that the government expects its mid-term review of the city’s gaming industry and the city’s gaming concessions to be completed this year. The results would be publicly announced by early next year at the latest, he added.

The government has meanwhile appointed Paulo Martins Chan, an assistant public prosecutor-general, to be the next head of the Macau gaming regulator. Mr Chan will replace Manuel Joaquim das Neves as director of the Gaming Inspection and Coordination Bureau. The new appointment will become effective on December 1.

“Overall we do not sense any change in tone either way towards the gaming industry from the [policy] address,” said analysts Anthony Wong and Angus Chan of UBS Securities Asia Ltd, commenting on Mr Chui’s Tuesday speech.

They added: “The presentation mostly reiterated previously known directions, including: encouraging development of non-gaming; the gaming concession mid-term review is ongoing and will be ready soon; better control on junket industry; continue to protect the local workforce, and encourage buying from local enterprises.”

On Tuesday, Mr Chui additionally said the government would continue to assess the city’s capacity to receive visitors and study crowd-control measures during holiday periods.

Pragmatic Play Ltd, a content provider to the iGaming industry, has launched a new slot game called “Monster Superlanche”. The game is played across 6×5 reels, with colourful ‘monsters’... END_OF_DOCUMENT_TOKEN_TO_BE_REPLACED