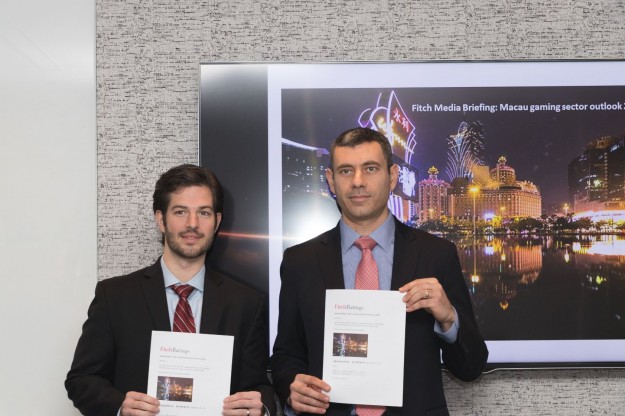 The market-wide growth rate of gross gaming revenue (GGR) in Macau will decelerate to 11 percent in 2018, with mass segment contributing to almost half of the tally, Fitch Ratings Inc forecasts.

“For 2018, we are forecasting 11 percent GGR growth for Macau, which is a deceleration from 19 percent that we saw last year,” said Fitch Ratings director Colin Mansfield (pictured left), at a media briefing session on Thursday.

“The market will continue to benefit from a healthy China economy and the opening of new resorts and ramp-up of existing properties,” he said.

Fitch also estimated that the mass and VIP segments would grow by 14 percent and 9 percent year-on-year respectively in 2018.

Mr Mansfield said the increase in mass market revenue in 2018 would be “driven by new supply and repositioning of some assets towards the premium mass segment”, which would be “positive for the market as the mass segment is more stable and less credit dependent” than the VIP segment.

As for the high roller segment, Mr Mansfield pointed out its volatility as contributing to a more conservative forecast by Fitch.

“Fitch’s cautious position on VIP reflects inherent volatility and the potential for an economic slowdown on mainland China. The housing market [in mainland China] continues to show signs of deceleration, with housing sales turning negative year-on-year for three consecutive months in fourth quarter 2017. In addition, credit conditions are tightening,” the Fitch representative said.

On an operator level, Fitch is forecasting that Sands China Ltd is in the best position for long-term growth in Macau, as the city’s gaming industry becomes increasingly more mass-market oriented, with the centre of gravity shifting from the peninsula to Cotai. Sands China is a subsidiary of U.S.-based casino operator Las Vegas Sands Corp.

“Las Vegas Sands’ upgrade of the Parisian’s hotel product, build out of Four Seasons and St. Regis suites, and the US$1 billion conversion of Sands Cotai Central into the Londoner support this view,” said Mr Mansfield.

He added that while the “bigger properties” in the peninsula downtown area still remain competitive, venues in “non-prime locations” and “those geared towards the base mass segment” are likely to be “most negatively impacted by new competition” from additional gaming offering in Cotai.

As for MGM Cotai, the delay-plagued Cotai property of Macau gaming operator MGM China Holdings Ltd, Fitch estimated it would contribute with approximately US$200 million in incremental earnings before interest, taxation, depreciation and amortisation (EBITDA) to MGM China in 2018. The estimation already took into account the potential cannibalisation at MGM Macau, MGM China’s property in the Macau Peninsula, said Mr Mansfield.

“The recent delay and uncertainty around the MGM Cotai opening before Chinese New Year may slow the initial ramp-up of the property. But it shouldn’t affect the long-term earning power,” said Mr Mansfield.

He added: “We estimate roughly 7 percent return on investment for [MGM Cotai], which is lower than [that of] Wynn Palace and Parisian Macao which opened not too long ago. That reflects the property’s [smaller] initial table allocation.”

Fitch expects the Zhuhai-Hong Kong-Macau Bridge, targeted to open in 2018, to enhance the ability of Macau’s gaming industry to attract clients from Hong Kong – including international visitors using the Hong Kong International Airport – and visitors from the eastern part of Guangdong province.

“For day-trippers, the ability to trim travel time will boost potential time allocated to gambling. More cost-efficient travel options may also result from the [opening of] the bridge [and] benefit the mass market,” Fitch’s Mr Mansfield said.

Alex Bumazhny (pictured right), senior director at Fitch, meanwhile forecast that the Macau authorities would not “materially disrupt the operating environment” as part of the gaming operator licence renewal process. Such concessions are due to end on various dates in either 2020 or 2022.

However, he pointed out several “risks” related to concession renewal process.

“Potential risks include the introduction of a seventh concessionaire or [request for incumbent operators to pay] a large one-time renewal fee. Another potential is an increase in gaming tax although we de not believe this to be likely as it would make Macau less competitive in the context of continued competition in the Asia-Pacific region,” said Mr Bumazhny.

He further commented that Macau’s gaming tax rate – at 39 percent of GGR – was already “very high” compared to other jurisdictions in Asia. Therefore, any tax increase would “put Macau in a more competitive disadvantage,” he said.

The Fitch senior director also commented on the prospects of the gaming industry in other markets in Asia-Pacific region, saying those markets were unlikely to have a material negative impact in the performance of the Macau casino sector in 2018. At most, Mr Bumazhny said, other jurisdictions in Asia would be a “mild headwind for Macau’s gaming growth, especially at the high-end of the market”.

He stated: “We expect cannibalisation to be more regional in nature. Japan’s integrated resorts will have a more material negative impact on casinos in Korea and Vladivostok while the expansions in Philippines and Malaysia appear to have a bigger impact on Singapore than on Macau.”

According to Mr Bumazhny, Fitch projects that a Japan integrated resort could generate annual GGR of around US$3 billion, depending on the total number of resorts authorised in the country.

Japan’s Prime Minister Shinzo Abe said in a speech on January 22 that his government planned to submit this year an Integrated Resorts (IR) Implementation Bill to parliament, in order to advance the country’s status as a “tourism-oriented” country.

Legislation making casino gambling legal in Japan came officially into effect in December 2016. But the arrival of 2017-end without the passage of an anti-gambling addiction bill – a statute seen as a precondition of casino industry legalisation – has pushed the casino development phase further down the track, a number of industry commentators have said.